Voters Turn Away From Democrats, Republicans 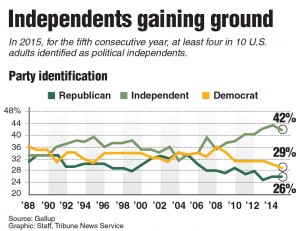 Americans’ loyalty to political parties is at or near historic lows, Gallup reported Monday.

The polling organization reported that last year, for the fifth consecutive year, “at least four in 10 U.S. adults identified as political independents.”

“Americans’ attachment to the two major political parties in recent years is arguably the weakest Gallup has recorded since the advent of its polls,” Gallup’s Jeffrey Jones said in an analysis. “The percentage of U.S. adults identifying as political independents has recently reached levels never seen before.”

The key reason for the independent surge is Americans’ frustration with government gridlock. But there is some hope parties can rebound.

“Given that 2016 is a presidential election year, and the percentage of independents usually declines in years when Americans are choosing a president, both parties have an opportunity to win back some of their lost support,” Gallup said. “But doing so partly depends on how appealing the parties’ and their presidential candidates’ messages prove to be.”

Even if the parties’ numbers climb, Jones wrote, they will find “an electorate that has a historically high percentage of voters who do not identify with either major party. And the lack of strong attachment to the parties could make candidate-specific factors, as opposed to party loyalty, a greater consideration for voters in choosing a president in this year’s election than they have been in past elections.”