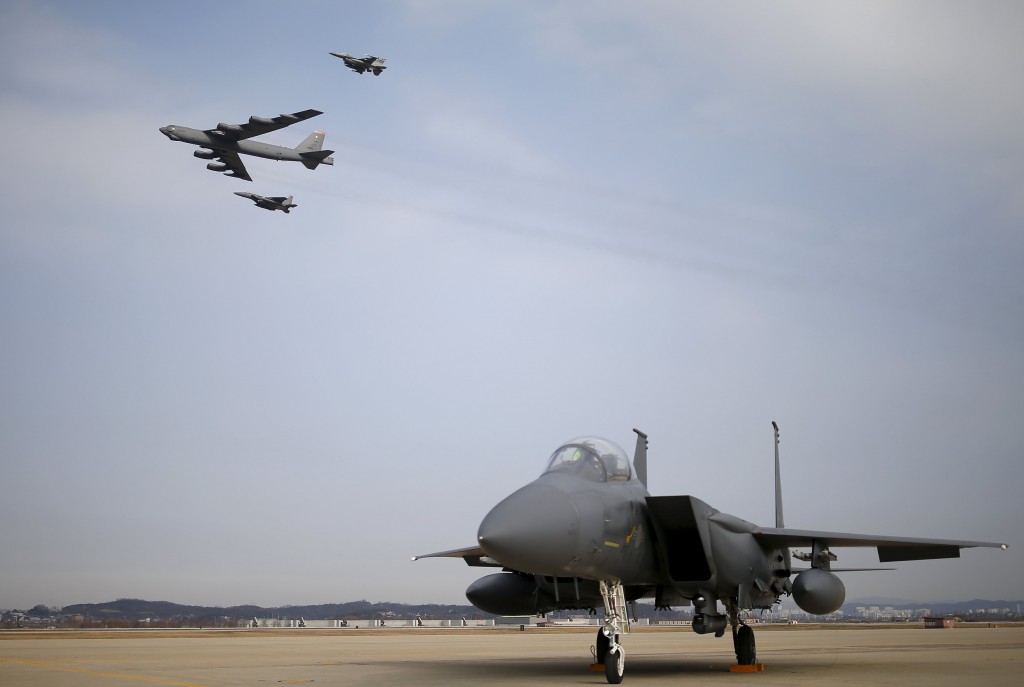 A powerful U.S. B-52 bomber flew low over South Korea early Sunday, a clear show of force from the United States as a Cold War-style standoff deepened between its ally Seoul and North Korea following Pyongyang’s fourth nuclear test.

North Korea will read the flyover of a bomber capable of delivering nuclear weapons – seen by an Associated Press photographer at Osan Air Base near Seoul – as a threat. Any hint of America’s nuclear power enrages Pyongyang, which links its own pursuit of atomic weapons to what it sees as past nuclear-backed moves by the United States to topple its authoritarian government.

The B-52 was joined by South Korean F-15 and U.S. F-16 fighters and returned to its base in Guam after the flight, the U.S. military said.

“This was a demonstration of the ironclad U.S. commitment to our allies in South Korea, in Japan, and to the defense of the American homeland,” said Adm. Harry B. Harris Jr., commander U.S. Pacific Command, in a statement. “North Korea’s nuclear test is a blatant violation of its international obligations.”

The B-52 flight follows a victory tour by North Korean leader Kim Jong Un to celebrate the country’s widely disputed claim of a hydrogen bomb test. Kim is seeking to rally pride in an explosion viewed with outrage by much of the world and to boost his domestic political goals.

There was no immediate reaction from North Korea’s state media to the B-52 flyover, which also happened after North Korea’s third nuclear test in 2013.

Kim’s first public comments about last week’s test came in a visit to the country’s military headquarters, where he called the explosion “a self-defensive step” meant to protect the region “from the danger of nuclear war caused by the U.S.-led imperialists,” according to a dispatch Sunday from the state-run Korean Central News Agency.

“It is the legitimate right of a sovereign state and a fair action that nobody can criticize,” Kim was reported as saying during his tour of the People’s Armed Forces Ministry.

The tone of Kim’s comments, which sought to glorify him and justify the test, is typical of state media propaganda. But they also provide insight into North Korea’s long-running argument that it is the presence of tens of thousands of U.S. troops in South Korea and Japan, and a “hostile” U.S. policy that seeks to topple the government in Pyongyang, that make North Korea’s pursuit of nuclear weapons absolutely necessary.

During his tour, Kim posed for photos with leading military officials in front of statues of the two members of his family who led the country previously – Kim Jong Il and Kim Il Sung. He also sought to link the purported success of the nuclear test to a ruling Workers’ Party convention to be held in May, the party’s first since 1980. He’s expected to use the congress to announce major state policies and shake up the country’s political elite to further consolidate his power.

World powers are looking for ways to punish the North over a nuclear test that, even if not of a hydrogen bomb, still likely pushes Pyongyang closer to its goal of a nuclear-armed missile that can reach the U.S. mainland. Many outside governments and experts question whether the blast was in fact a powerful hydrogen test.

In the wake of the test on Wednesday, the two Koreas have settled into the kind of Cold War-era standoff that has defined their relationship over the past seven decades. Since Friday, South Korea has been blasting anti-Pyongyang propaganda from huge speakers along the border, and the North is reportedly using speakers of its own in an attempt to keep its soldiers from hearing the South Korean messages.

A top North Korean ruling party official’s recent warning that the South’s broadcasts have pushed the Korean Peninsula “toward the brink of war” is typical of Pyongyang’s over-the-top rhetoric. But it is also indicative of the real fury that the broadcasts, which criticize the country’s revered dictatorship, cause in the North.

South Korean troops, near about 10 sites where loudspeakers started blaring propaganda Friday, were on the highest alert, but have not detected any unusual movement from North Korea along the border, said an official from Seoul’s Defense Ministry, who refused to be named, citing office rules.

South Korea’s Yonhap news agency said Seoul had deployed missiles, artillery and other weapons systems near the border to swiftly deal with any possible North Korean provocation. The ministry would not confirm the report, nor another by Yonhap that said North Korea had started its own broadcasts likely meant to keep its soldiers from hearing the South Korean messages.

Officials say broadcasts from the South’s loudspeakers can travel about 10 kilometers (6 miles) during the day and 24 kilometers (15 miles) at night. That reaches many of the huge force of North Korean soldiers stationed near the border, as well as residents in border towns such as Kaesong, where the Koreas jointly operate an industrial park that has been a valuable cash source for the impoverished North.

While the South’s broadcasts also include news and music, much of the programming challenges North Korea’s government more directly.

“We hope that our fellow Koreans in the North will be able to live in a society that doesn’t invade individual lives as soon as possible,” a female presenter said in parts of the broadcast that officials revealed to South Korean media. “Countries run by dictatorships even try to control human instincts.”

Marathon talks by the Koreas in August eased anger and stopped the broadcasts, which Seoul started after blaming North Korean land mines for maiming two soldiers. It might be more difficult to do so now. Seoul can’t stand down easily, some analysts say, and it’s highly unlikely that the North will express regret for its nuclear test, which is a source of intense national pride.

Diplomats at a U.N. Security Council emergency session pledged to swiftly pursue new sanctions. For current sanctions and any new penalties to work, better cooperation and stronger implementation from China is seen as key.

It may take weeks or longer to confirm or refute the North’s claim that it successfully tested a hydrogen bomb, which would mark a major and unanticipated advance for its still-limited nuclear arsenal.