Israel Ha’aretz Gets Flack from Right, Left for ‘Flag-gate’
Israel 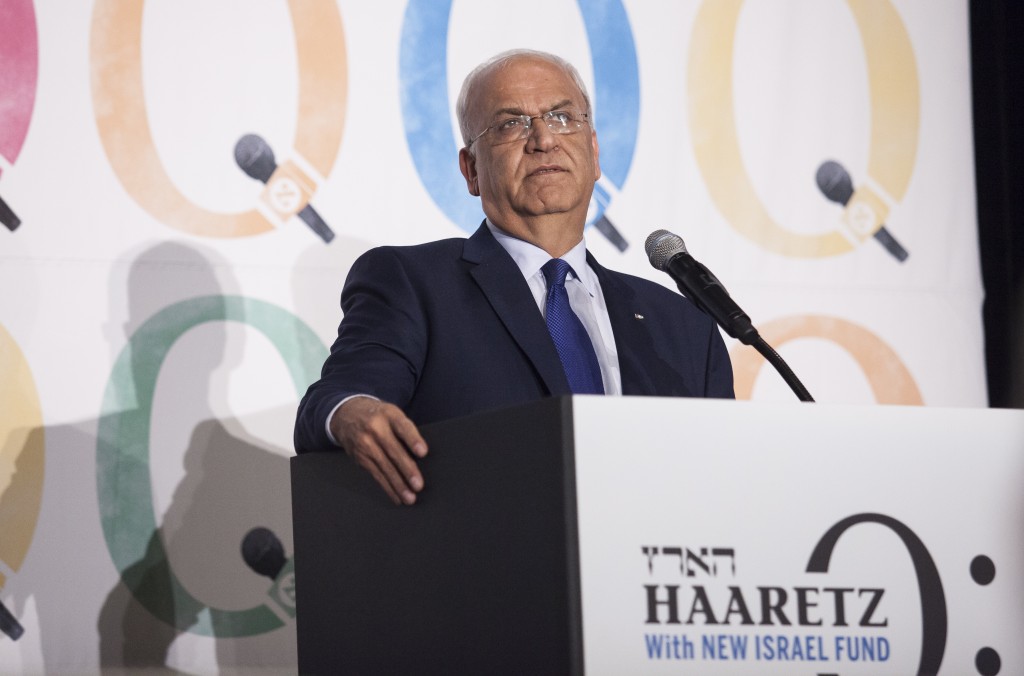 Daily newspaper Ha’aretz continued to be the target of criticism for its decision last week to remove an Israeli flag from the stage at its conference in New York in order to accommodate Palestinian Authority negotiator Sa’eb Erekat. Along with right-wing MKs and public figures, prominent spokespeople on the left have also spoken up – the latest being Moshe Shlonsky, a veteran Israeli journalist who is closely identified with the left.

The decision, Shlonsky said in an interview on Army Radio Friday, was “shameful. This was a grave mistake. If Erekat did not want to speak with an Israeli flag hanging behind him, so be it. We do not have to panic when such decisions are made.”

The incident occurred Sunday at the newspaper’s “Ha’aretz with New Israel Fund” conference in New York, where a host of speakers discussed their views on the peace process and the two-state solution. Among the speakers was Erekat, who leads the PA negotiations with Israel, the U.S. and Europe, and is the PA’s chief English-language spokesperson. According to those present, Erekat refused to get on stage as long as an Israeli flag was hanging on the stage – and to accommodate him and enable him to speak, organizers of the conference pulled the flag down.

The move merited sharp criticism. Yesh Atid’s Yair Lapid said that the removal of the flag “exemplifies the loss of all pride and Zionist values on the left. Imagine if an Israeli speaker had demanded the removal of the Palestinian flag before speaking.” Absorption Minister Ze’ev Elkin said that it appeared that Ha’aretz “was prepared to defend the right to do anything, except to display the Israeli flag.”

Shlonsky was not the only figure identified with the left to criticize the move. Dan Margalit, another well-known journalist, asked “if Erekat had demanded that a Palestinian flag be hoisted, would Ha’aretz have complied with that too? Ha’aretz was too willing to give in, and that is bad, because it is an important newspaper, and important for Israeli democracy.”

In a statement, Ha’aretz acknowledged that it had removed the flag in order to assuage Erekat. “Erekat requested that we remove the flag, and President Reuven Rivlin requested that we display it. We responded positively to both requests. We do not feel the need to pander to the nationalistic clichés that are common in other Israeli media outlets.”