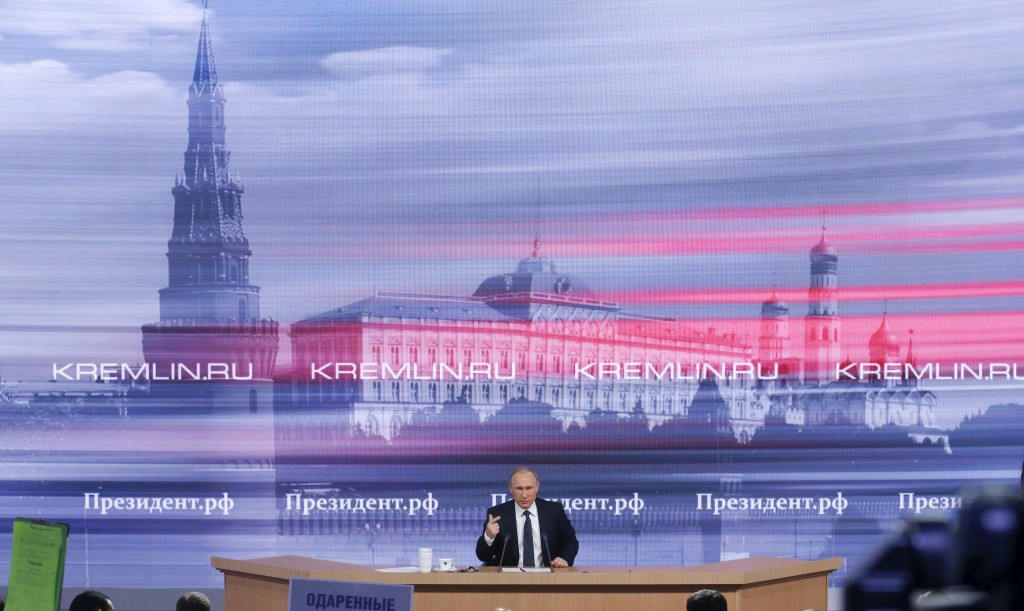 President Vladimir Putin said on Thursday that Russia wanted to develop relations with the United States, irrespective of who will become the next American president.

“We are ready to work with any president for whom the American people will vote,” Putin told his annual news conference.

“It’s them [the Americans] who try all the time to prompt us who to vote for,” Putin said.

Putin also said that he broadly supported U.S. plans to try to push forward the Syria peace process, but signaled in an angry attack that he was in no mood to forgive Turkey for shooting down a Russian warplane.

Addressing almost 1,400 reporters in a cavernous hall inside a Moscow conference center, the Russian leader said he generally backed a U.S. plan to prepare a U.N. resolution on Syria even though differences between Moscow and Washington remained.

But he signaled Moscow was not yet ready to withdraw its support for Syrian President Bashar al-Assad, saying a new constitution needed to be drawn up and elections held to determine the fate of the conflict-torn country.

“We believe that only the Syrian people can decide who should govern them,” Putin told an annual news conference, saying Moscow would continue its air strikes in Syria for as long as the Syrian army continued its own military operations.

His comments followed a visit to Moscow by U.S. Secretary of State John Kerry this week and come on the eve of a meeting of world powers in New York on Friday to discuss Syria.

Putin used the start of the news conference, a set piece of Russian political life, to seek to reassure voters over the troubled state of Russia’s economy.

Buffeted by Western sanctions imposed over the Ukraine crisis, falling oil prices, and a weakening ruble, Russia’s economy is forecast to shrink by around 4 percent this year, its sharpest contraction since the global financial crisis.

“The Russian economy has passed the crisis. At least, the peak of the crisis,” said Putin.

Despite the economic pain, polls show Putin’s ratings, which were boosted by his decision to annex Ukraine’s Crimea last year and to launch air strikes in Syria, remain at around 85 percent, not far off their record highs of almost 90 percent in October.

Answering a question about Ukraine – with which relations remained strained over a smoldering conflict in eastern Ukraine and Crimea – Putin appeared to confirm the presence of Russian Special Forces in east Ukraine for the first time.

He said he wanted better ties with Kiev overall.

But he had no such charitable words for Turkey and made clear he was in no mood to forgive Ankara for shooting down a Russian warplane near the Turkish-Syrian border on Nov. 24.

Russia imposed economic sanctions on Ankara in retaliation. Using salty language, Putin mused that Turkey may have been trying to ingratiate itself with Washington by shooting the plane down.

“It is hard for us to reach agreement with the current Turkish leadership, if at all possible,” said Putin, calling the downing of the Russian plane “a hostile act.”

“What have they achieved? Maybe they thought that we would run away from there [Syria]? But Russia is not such a country,” he said.

Putin, a former Soviet KGB officer, has ruled Russia as either president or prime minister for 16 years.

He has not yet said whether he intends to stand for a fourth presidential term in 2018. If he did, he could remain in power until 2024.