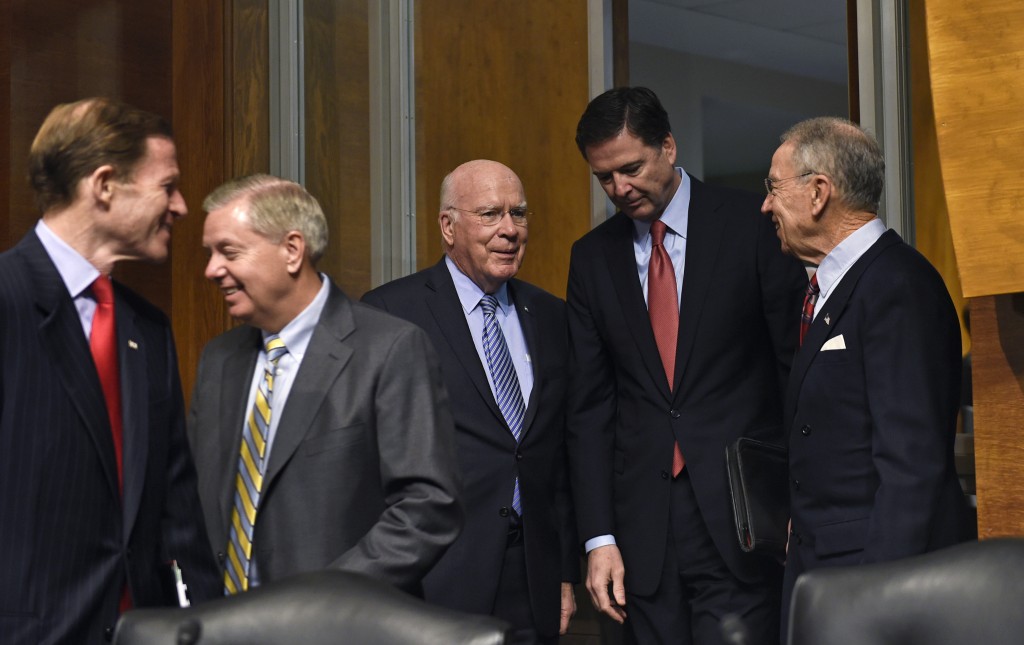 The deadly rampages in Paris and San Bernardino have added new urgency to Obama administration efforts to prevent terrorists who trained with Islamic State or other terror groups in Iraq and Syria from launching terrorist attacks when they return home.

FBI Director James B. Comey told a Senate hearing Wednesday that the Islamic State remains intent on smuggling terrorists into the United States as well as inspiring Americans and visa holders already here to conduct attacks.

He said U.S. authorities have not found evidence yet that the terror group based in Syria and Iraq has specifically sent anyone to America.

But his testimony came as authorities in France said they had identified a 23-year-old man from Strasbourg, France, as the third shooter in the terrorist assault on the Bataclan hall in Paris on Nov. 13.

Foued Mohamed Aggad went to Syria to join Islamic State in late 2013, officials said. But he managed to slip back into France and was among three terrorists who killed 90 people in the Bataclan, the worst death toll in a series of attacks that left 130 people dead across the city.

The development means Europeans trained by the Islamic State in Syria were largely if not entirely responsible for the terrorist attacks that night. They used Belgian and French passports to move easily across open borders in Europe before and after the attack, and at least one reportedly entered by joining the flood of refugees fleeing the war.

Senator Chuck Grassley, chairman of the Judiciary Committee, said the National Counterterrorism Center also has identified refugees “with ties to terrorists in Syria who are attempting to enter the United States through the refugee program.”

He did not provide details, but said that counterterrorism officials believe the Islamic State and other terrorist groups are testing U.S. immigration programs to see if they can smuggle operatives or followers into the United States.

U.S. officials estimate that 30,000 people from more than 100 countries — including about 4,000 with European passports and dozens of Americans — have joined the conflict in Iraq and Syria over the last four years and could pose a long-term danger to the United States and its allies.

The total is almost double the number of foreign terrorists who flocked to Afghanistan in the 1980s to fight the Soviet Union, a war that spawned al-Qaida.

“We’ve never seen anything like this historically,” said a senior U.S. official, who spoke on condition of anonymity to brief reporters.

The official said the number of foreigners trying to get to Syria has leveled off in recent months, partly as a result of stepped-up air strikes by the U.S.-led coalition on Islamic State positions and intensified efforts by Turkey and other countries to control their borders.

“It is not the same to the extent it was a year ago or some months ago,” the official said. “But they’re still trying to get into Syria.”

Top national security and law enforcement leaders have gathered in recent days at the Pentagon to discuss efforts to choke off the flow of foreign fighters, as U.S. officials urged European countries to share more sensitive information about the threat.

No evidence suggests Syed Rizwan Farook and his wife, Tashfeen Malik, traveled to Iraq or Syria before they shot and killed 14 people in San Bernardino, Calif., last week.

The FBI is searching for clues that the Islamic State or another group introduced the couple, or helped them plan the San Bernardino assault.

The disclosure raised fresh questions about how they successfully evaded detection for so long.

The FBI has more than 900 investigations open across the country of potential supporters and sympathizers of terrorist groups, including the Islamic State.