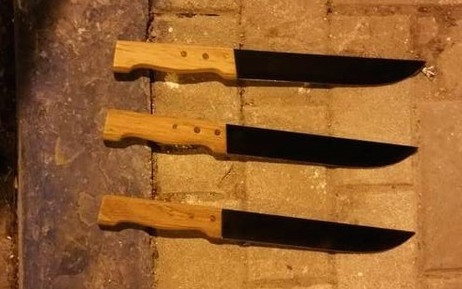 Officials in Afula said Wednesday night that, b’chasdei Shamayim, a major terror attack was avoided. Three Arab youths from Jenin were caught in the middle of Afula and found to be carrying large knives. Under questioning, the Arabs said that they had planned “to do something crazy” in the city.

The three were arrested on a main commercial artery in the city, after several residents called the police and said that the group was acting in a suspicious manner. Approaching them, police noticed one of them throw something large onto the street, which turned out to be a large knife. His two companions were also found to be carrying knives.

Under questioning, the three said that they were from the Palestinian Authority-controlled town of Jenin. Two of the three were minors. Police are investigating how they got into Afula. A spokesperson for the police said that the country “avoided waking up Thursday to a difficult morning, as the three were planning on going on a killing spree.”

An Israeli couple was ambushed in a drive-by shooting attack on Wednesday evening as they traveled in their car from Avnei Cherfetz to Einav at the Haorev Junction in Shomron. The incident occurred on a road that was recently opened to Palestinian traffic. Paramedics who rushed to the scene reported that a 62-year-old man, Shaul Nir, was moderately-to-seriously injured with head wounds. His wife, Rachel, also in her sixties, was moderately hurt.