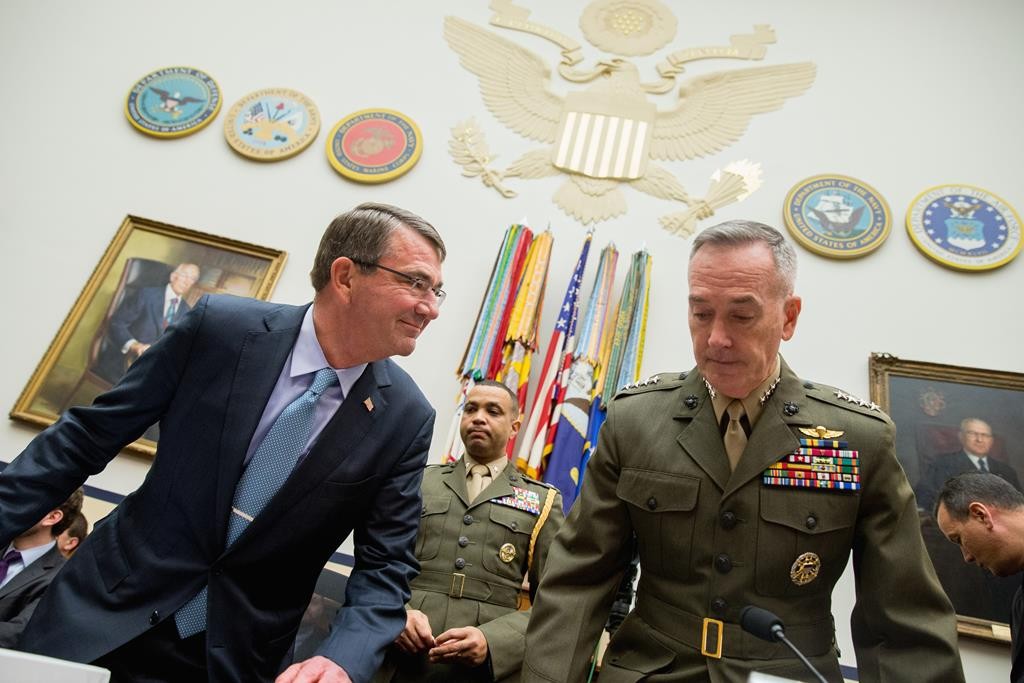 The U.S. military will deploy a new special operations force to Iraq to step up the fight against Islamic State terrorists unleashing violence in Iraq and Syria and determined to hold territory they have seized across the Middle East, Defense Secretary Ash Carter told Congress on Tuesday.

Carter, who testified alongside Gen. Joseph Dunford, chairman of the Joint Chiefs of Staff, faced skeptical lawmakers who argued that the U.S. needs to be more forceful in countering the threat from IS, credited with attacks in Paris and Beirut and the downing of a Russian airliner.

Carter told the House Armed Services Committee that over time, the special operations force will be able to conduct raids, free hostages, gather intelligence and capture IS leaders. Carter said that will improve intelligence and generate more targets for attacks.

There currently are about 3,500 U.S. troops in Iraq, and President Barack Obama had previously announced he was sending fewer than 50 special operations forces to Syria. There has been a growing call from some Republicans for more U.S. boots on the ground and a divide among war-weary Americans about the prospect of greater military involvement.

Carter said the number in the new expeditionary force will be “larger” than 50. He said it will be a “standing” force, meaning it will be stationed in Iraq. He said it would focus on helping Iraq defend its borders and build the Iraqi security forces, but also would be in position to conduct unilateral operations into Syria.

“This is an important capability because it takes advantage of what we’re good at,” Carter said. “We’re good at intelligence, we’re good at mobility, we’re good at surprise. We have the long reach that no one else has. And it puts everybody on notice in Syria. You don’t know at night who’s going to be coming in the window. And that’s the sensation that we want all of ISIL’s leadership and followers to have.”

Carter said the force might be American only, but more likely would be a mixed force with perhaps Kurdish troops or others who are fighting the terrorists.

In October, U.S. special operations troops and Iraqi forces raided a compound in northern Iraq freeing about 70 Iraqi prisoners who were facing execution. One U.S. service member was killed in the raid, the first American combat death in Iraq since the U.S. began its campaign against IS in August 2014. In May, a Delta Force raid in Syria killed IS financier Abu Sayyaf, yielded intelligence about the group’s structure and finances.

Rep. Mac Thornberry (R-Texas), the chairman of the committee, said the U.S. military effort must be bolstered and directed by the military and not “White House aides micromanaging” military operations.

“If we’re going to be serious about ISIS, the president needs to assign the military a clear mission and then allow the military to carry it out,” Thornberry said, using an acronym for the terrorist network.

Rep. Adam Smith of Washington state, the top Democrat on the committee, said the group needs to be defeated, not just contained. He said IS gains strength by claiming to be fighting against Western aggression.

Carter said in recent weeks that air strikes have destroyed IS oil wells, processing facilities and nearly 400 oil tanker-trucks. Dunford said that about 43 percent of the revenue that IS derives from oil has been affected by the recent strikes and that the U.S. also is targeting cement and other industries from which IS draws funds.

In Syria, Carter said that U.S-backed local forces are engaging IS fighters in the last remaining pocket of access between Syria and Turkey to the north. The U.S. also is helping a coalition of Syrian Arabs in northeastern Syria, fighting alongside Kurdish forces, that has pushed IS out of the town of al-Hawl and at least 347 square miles of surrounding territory. In Iraq, Kurdish units, with help from the U.S., have retaken the northern town of Sinjar and cut off communication between Mosul in Iraq and Raqqa in Syria, the two largest cities under IS control.