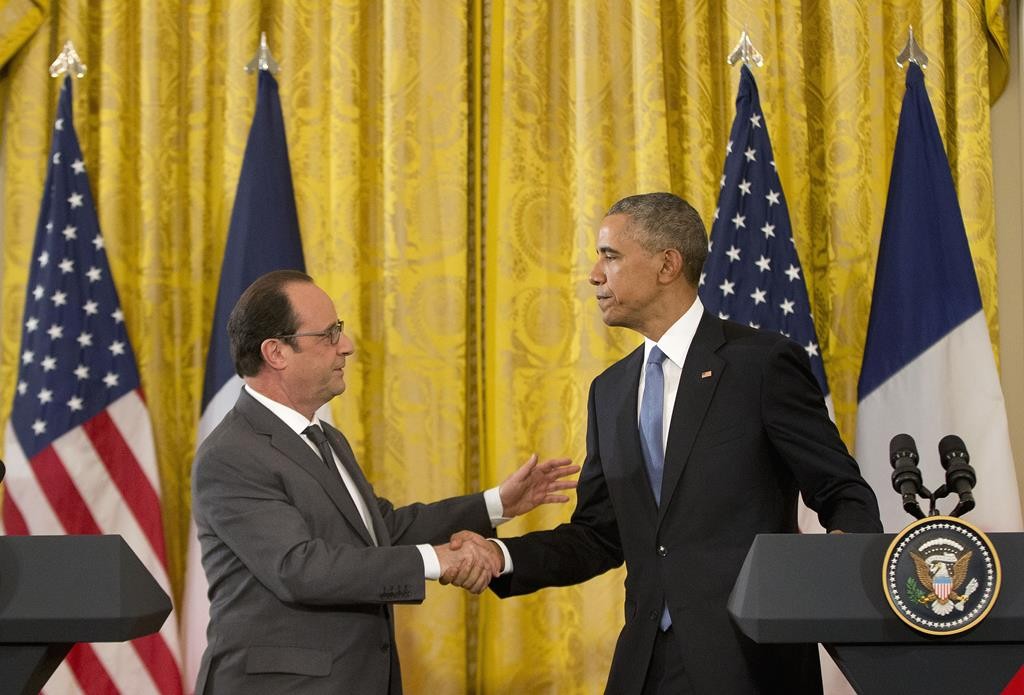 The U.S. and French leaders, in a news conference in the East Room of the White House, said that while they would welcome Russia into the 65-nation coalition against the terrorist group, that can happen only if Russian President Vladimir Putin shifts his focus to targeting Islamic State rather than groups backed by the U.S. and its allies.

The effort by France and the United States to intensify the campaign against Islamic State was complicated by the downing of a Russian fighter jet near the Syrian border by Turkey, a NATO ally, just hours before Obama and Hollande met. Both men called for Russia and Turkey to avoid escalating the confrontation.

The incident underscores “an ongoing problem with Russian operations” in Syria because Putin’s forces are conducting strikes near the Turkish border and targeting moderate groups supported by Turkey and other countries involved in the conflict, Obama said. Russia is an “outlier” in its support of Assad, he said.

Hollande, who is scheduled to meet with Putin on Thursday in Moscow, said he will make clear Russia must turn away from hitting the anti-Assad groups that are essential to waging a ground campaign against Islamic State. Hollande said Assad must leave power “as soon as possible,” though he and Obama declined to set a timetable. Both said talks in Vienna on a cease-fire and political settlement would set the course.

Obama and Hollande met 11 days after terrorists tied to Islamic State killed 130 people in and around Paris. The attack was a vivid demonstration of the threat the group poses beyond its territory in Syria and Iraq and prompted the Obama administration to urge its allies to take on a greater role in the fight.

Islamic State “poses a serious threat to all of us,” Obama said in his opening remarks with Hollande at his side. “It cannot be tolerated; it must be destroyed.”

As shocking as the Paris attacks were, Obama said the U.S. and its allies have prevailed against greater threats, including two world wars and the long Cold War confrontation with the Soviet Union. “Make no mistake: we will win,” he said.

“The Paris attacks generated a lot of emotion. But that’s not enough,” Hollande said through a translator. “Compassion, solidarity, and I take note of it. But we must act.”

Obama said that while the multinational coalition has managed to push Islamic State from some territory it held in Syria and Iraq, U.S. partners in the fight must do more. Hollande said the U.S. and France would “scale up” air strikes with the priority of reclaiming key locations now controlled by the terrorists.

Like Obama, Hollande said France would continue to provide air support and aid local forces but “won’t intervene on the ground.”

While Obama didn’t specify what additional military steps should be taken by other countries, he said the U.S. would speed up intelligence-sharing with European nations and he called on them to finally implement an agreement requiring airlines to share information to help detect foreign fighters trying to travel into Western nations.