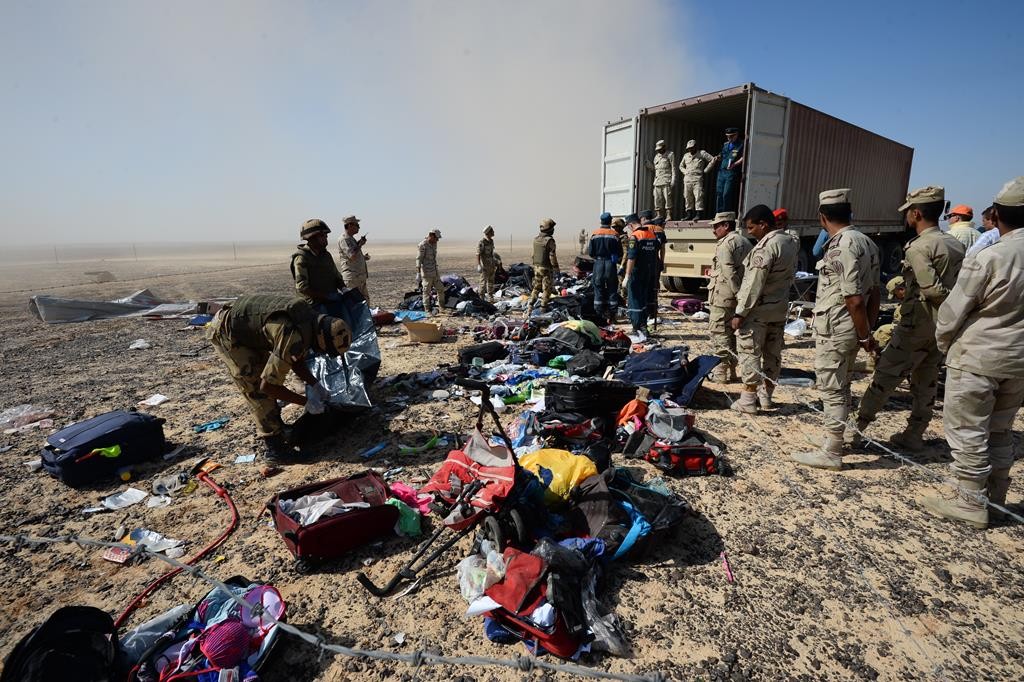 Mystery and confusion surrounded the final moments of a Russian jetliner that plummeted suddenly from high altitude to the Egyptian desert, killing all 224 people aboard. The airline Monday ruled out pilot error or a technical fault, but Russian aviation officials dismissed those comments as premature.

Some aviation experts raised the possibility that a bomb on board the Metrojet Airbus A321-200 brought it down, while others cited an incident in 2001 when the aircraft grazed the runway with its tail while landing.

James Clapper, the U.S. director of national intelligence, said that while there is no direct evidence of any terrorist involvement yet, it couldn’t be excluded that the plane was brought down by Islamic State extremists in the Sinai Peninsula.

“It’s unlikely, but I wouldn’t rule it out,” he told reporters in Washington.

Asked if a terrorist attack could be ruled out, President Vladimir Putin’s spokesman, Dmitry Peskov, said: “No versions could be excluded.”

The Metrojet was flying at 31,000 feet over the Sinai when it crashed Saturday only 23 minutes after taking off from the Egyptian Red Sea resort of Sharm el-Sheikh for St. Petersburg with mostly Russian passengers.

Metrojet firmly denied that the crash could have been caused by either equipment failure or crew error.

“The only possible explanation could be an external impact on the airplane,” Metrojet’s deputy director Alexander Smirnov told a news conference in Moscow. When pressed for more details, Smirnov said he was not at liberty to discuss them because the investigation was ongoing.

Asked if the plane could have been brought down by a terrorist attack, he said only that “anything was possible.”

Viktor Yung, another deputy director general of Metrojet, said the crew did not send a distress call and did not contact traffic controllers before the crash. Egyptian officials have offered conflicting accounts on whether or not the plane issued any distress calls.

Experts say planes break up in flight usually due to one of three factors: a catastrophic weather event, a midair collision, or an external threat, such as a bomb or a missile.

A local affiliate of the terrorist Islamic State group has claimed it brought down the aircraft, which crashed in the northern Sinai where the Egyptian military and security forces have battled terrorists for years. Both Egyptian and Russian officials have dismissed that claim as not credible.

Still, the U.S., Germany and Britain all had overflight warnings in place for the Sinai. They advised airlines to avoid flying over the peninsula below 26,000 feet and to avoid the Sharm el-Sheik airport due to terrorist violence and, notably, the use of anti-aircraft weapons.