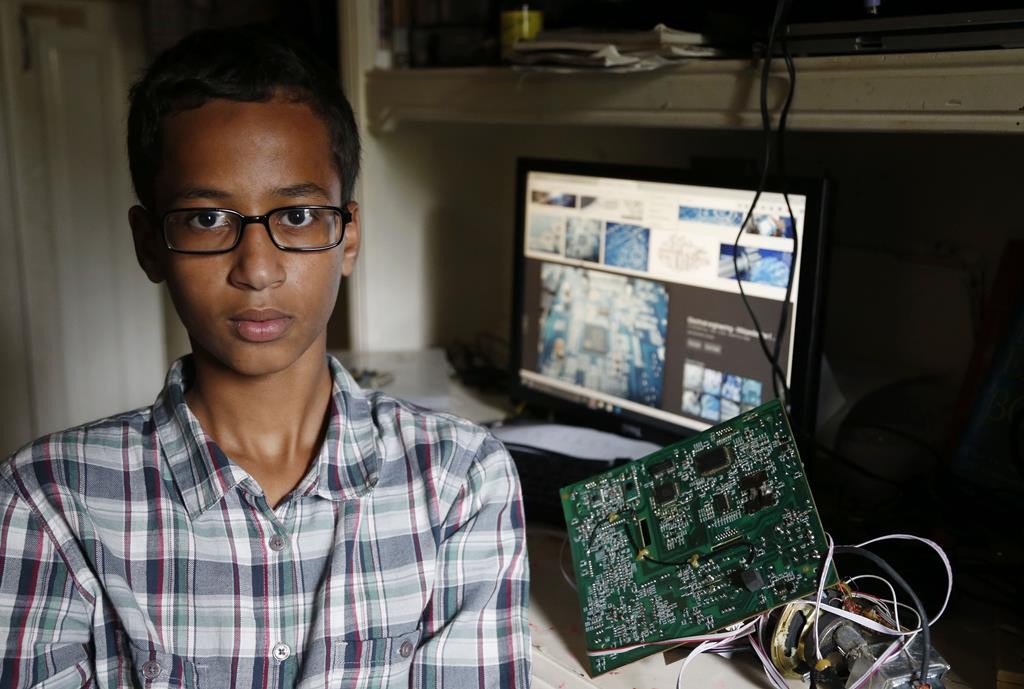 A 14-year-old Muslim boy became a sensation on social media Wednesday after word spread that he had been placed in handcuffs and suspended for coming to school with a homemade clock that teachers thought resembled a bomb.

Police declined to seek any charges against Ahmed Mohamed, but that did little to tamp down criticism of police and school officials or suspicions that they had overreacted because of the boy’s religion.

Ahmed was pulled from class Monday and taken to a detention center after showing the digital clock to teachers at his suburban Dallas high school.

Irving Police Chief Larry Boyd said the clock looked “suspicious in nature,” but there was no evidence the boy meant to cause alarm at MacArthur High School. Boyd considers the case closed.

Groups including the American Civil Liberties Union condemned what they called the school’s heavy-handed tactics.

“Instead of encouraging his curiosity, intellect and ability, the Irving (school district) saw fit to throw handcuffs on a frightened 14-year-old Muslim boy wearing a NASA T-shirt and then remove him from school,” Terri Burke, executive director of the ACLU in Texas, said in a statement.

The White House also weighed in.

In a tweet, President Obama said more kids should be inspired like him to enjoy science, because “it’s what makes America great.”

Asked if bias was involved, White House press secretary Josh Earnest said it was too early “to draw that direct assessment from here.” But, he added, Ahmed’s teachers had “failed him.”

“This is an instance where you have people who have otherwise dedicated their lives to teach our children who failed in that effort, potentially because of some things in their conscience and the power of stereotypes,” he said.

The boy was invited to participate in an astronomy night the White House is organizing sometime next month with premier scientists.

The teen explained to The Dallas Morning News that he makes his own radios, repairs his own go-kart and on Sunday spent about 20 minutes before bedtime assembling the clock using a circuit board, a power supply wired to a digital display and other items.

Ahmed’s father, Mohamed Elhassan Mohamed, told the Morning News that his son “just wants to invent good things for mankind. But because his name is Mohamed and because of Sept. 11, I think my son got mistreated.”

The boy’s family said Ahmed was suspended for three days. It was not clear if he will be allowed to return to school now that police have declined to pursue the matter.

The police chief said the reaction to the clock “would have been the same regardless” of his religion.

“We live in an age where you can’t take things like that to school,” Boyd said.

Boyd said police have an “outstanding relationship” with the Muslim community in Irving and that he would meet the boy’s father Wednesday to address any concerns.