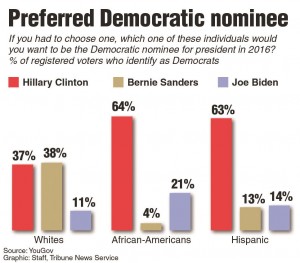 President Barack Obama is the man in the middle, caught between the White House aspirations of two of his closest advisers: Vice President Joe Biden and former Secretary of State Hillary Rodham Clinton.

For months, White House officials expected Clinton to be the Democratic nominee in the 2016 election. Some of Obama’s top political advisers moved to New York to run her campaign and Obama appeared to give his tacit approval, saying she would be an “excellent president.”

But that bet on Clinton suddenly looks less certain.

With Biden weighing his own presidential run more seriously amid signs of weakness in Clinton’s campaign, the White House faces the prospect of a family feud over who will become heir to Obama’s legacy.

“Certainly he’s got something at stake here,” White House spokesman Josh Earnest said Monday of Obama’s interest in the 2016 election.

Biden’s recent overtures to donors and Democratic officials have led to palpable awkwardness in the West Wing as aides – many with close ties to Clinton, the vice president, or both – try to maintain impartiality.

Earnest raised the prospect that Obama could endorse a candidate in the Democratic primary, though others close to the president say it’s unlikely he’d publicly put his thumb on the scale if Clinton and Biden were locked in a close contest.

In picking between Biden and Clinton, Obama would be making a choice between two of the most influential members of his administration.

Obama and Clinton long ago turned their political rivalry from the 2008 primary into an alliance.

Clinton left the administration in early 2013 after four years as Obama’s secretary of state, but she and the president still get together for occasional meetings.

However, some White House officials were irked by revelations that Clinton sidestepped administration guidelines by using a private email account on her own computer server to do State Department business.

Privately, some Obama allies also say they’re miffed at Clinton’s handling of the email controversy, which continues to dog her campaign.

Meanwhile, Obama and Biden appear to have developed a genuine friendship during their six and a half years in the White House. When Biden’s son, Beau, died of brain cancer earlier this year, Obama delivered a moving eulogy in which he referred to the vice president as a “brother.”

In the weeks after the younger Biden’s death, Obama made sure Biden was by his side for high-profile administration announcements.

People familiar with Biden’s thinking say he’s yet to make a final decision, but is likely to announce his political future within a month. The vice president is consulting with a close circle of longtime advisers.

Of course, what’s at stake for Obama in the 2016 election is more than just his personal relationships with Clinton and Biden. Much of his legacy is contingent on a Democratic president maintaining his policies.

Clinton has more latitude than Biden in breaking with Obama policies given that her job was largely limited to foreign affairs.

The vice president, however, has been a central figure in wide-ranging administration policies and has been the point person on everything from the economic stimulus to gun control legislation to Ukraine.

“Biden, as the president’s partner, would be closely identified with the Obama legacy,” said David Axelrod, a longtime Obama political adviser. However, he added that “any Democrat will carry the benefits and burdens of Obama into this election.”

This article appeared in print on page 5 of the August 26th, 2015 edition of Hamodia.