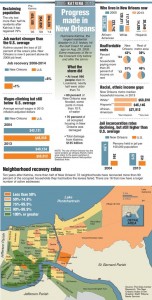 When Angele Givens looks around her neighborhood in the Gentilly section of New Orleans, she is struck by the contrast with 10 years ago, when Hurricane Katrina triggered floods that filled her home and tens of thousands of others with water. Today, more than 80 percent of the structures in her Vista Park neighborhood have been renovated or rebuilt, and work is underway on others. But the area may never have staged its comeback without a rebuilding of confidence in local flood protection, said Givens, president of her neighborhood’s improvement association.

“I never worried about flooding before Katrina, but after the storm, we had to ask whether it made sense, financially, to come back,” she said. Billions of dollars of work carried out by the U.S. Army Corps of Engineers, including the construction of a massive surge barrier just east of the city, helped answer that question, Givens said. “They have done a lot of work on the levees and the canals,” she said. “I think our odds against floods are significantly improved.”

The 2005 flood that inundated 80 percent of New Orleans and killed 1,572 people began hours after Katrina had blown through the city. Water forced by the storm into inland canals overwhelmed levees and broke through floodwalls. After Katrina, Congress authorized spending more than $14 billion to beef up the city’s existing flood protection infrastructure and to build a series of new barriers. Despite the enormous outlay, there are no guarantees. Plans to bolster flood protection, drawn up years ago, never addressed the wild card of climate change, which some experts now acknowledge will lift sea levels and trigger more intense storms.

Protecting against the potential devastation of those changes will require the building of more artificial barrier islands and wetlands south of New Orleans, experts say, a work in progress that will take years to complete.

Still, in the past 10 years, the Corps has bolstered 350 miles of levees and upgraded 70 pumping stations.

The Army’s public engineering arm also built the largest flood barrier it has ever attempted, a nearly two-mile-long concrete wall that stretches across the convergence of three major waterways that connect to the Gulf of Mexico. “These waterways form a funnel that directed the water into the Industrial Canal,” said John Lopez, coastal sustainability coordinator for the Lake Pontchartrain Basin Foundation, which helped plan the barrier system.

The funneling effect was the main cause of levee failures to the east of New Orleans. It also led to an explosive break on a floodwall along the Industrial Canal that devastated every home in the city’s Lower Ninth Ward neighborhood.

During a recent boat tour, Lopez pointed out some of the special features of the massive surge barrier. Nicknamed “The Great Wall,” it is buttressed by scores of 100-foot pilings and has two 150-foot-wide sector gates that give boats and barges access to the channels.

Even so, Lopez said, levees and surge barriers alone are not enough to secure the area against large storms. “We need multiple lines of defense,” he said.   Chip Kline, who chairs the Louisiana Coastal Protection and Restoration Authority, says New Orleans and the surrounding metropolitan area “are better protected than they ever have been” as a result of recent work.

This article appeared in print on page 6 of the August 19th, 2015 edition of Hamodia.