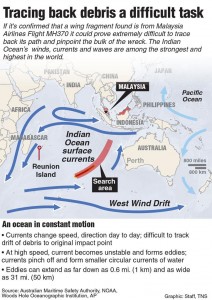 Malaysian officials said Sunday that they would seek help from territories near the island where a suspected piece of the missing Malaysia Airlines jet was discovered to try to find more plane debris.

A new piece of debris, meanwhile, found on Sunday on the French island of Reunion in the western Indian Ocean, turned out to be a “domestic ladder,” and doesn’t belong to a plane, Malaysian Director General of Civil Aviation Azharuddin Abdul Rahman told The Associated Press amid media reports that a new plane part was found.

Malaysian government officials will ask territories near Reunion to alert them if they find any debris that could be from a plane, a transport ministry official said on condition of anonymity because he wasn’t authorized to speak to the media.

A wing flap suspected to be from the missing Malaysia Airlines Flight 370 was found Wednesday on Reunion. It arrived Saturday at a French military testing facility, where it will be analyzed by experts.

Air safety investigators, including one from Boeing, have identified the component as a flaperon from the trailing edge of a Boeing 777 wing, a U.S. official has said. Flight 370 is the only missing 777 and many are convinced the flap comes from the ill-fated jet.

Malaysian Transport Minister Liow Tiong Lai said in a statement Sunday that representatives from Malaysia, the U.S., China, France and Boeing would take part in the verification of the flaperon.

About two-thirds of those aboard Flight 370 were Chinese.

This article appeared in print on page 3 of the August 3rd, 2015 edition of Hamodia.