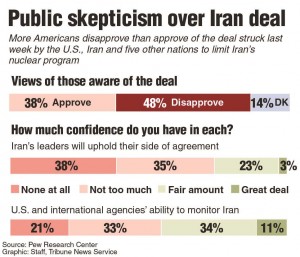 Congressional Republicans forcefully challenged President Barack Obama’s nuclear deal with Iran on Wednesday as the White House dispatched a Cabinet-level lobbying team to build support for the agreement to ease sanctions in exchange for concessions on the Islamic nation’s nuclear program.

“No serious person truly believes” that the United States faces a choice between implementing the agreement and going to war with Iran, said Senate Majority Leader Mitch McConnell (R-Ky.), rebutting statements from Obama and Secretary of State John Kerry.

Several other Republicans found fault with the deal in remarks on the Senate floor, including Sen. John Cornyn of Texas, who said there was a third option available. He noted the deal did not require the dismantling of Tehran’s nuclear infrastructure, and said, “There are tougher sanctions that will bring Iran to the table for a better deal and a good deal.”

Across the Capitol, Israeli Ambassador Ron Dermer met privately with several House Republicans. One participant in the meeting, Rep. Dave Brat of Virginia, said the diplomat’s main point had been to “pay less attention to all the details” like nuclear centrifuges, and more attention to “who’s on the other side of the ethical debate, and that is Iran.” Tehran is opposed to the existence of Israel.

The remarks preceded closed-door meetings in the House and the Senate with Kerry and Energy Secretary Ernest Moniz, both of whom were at the bargaining table with Iranians, as well as Treasury Secretary Jack Lew. The day’s sessions marked the beginning of the administration’s formal attempt to preserve the deal in what is likely to become a battle for enough votes to sustain a veto of Republican-crafted legislation that would torpedo it.

The agreement can take effect without congressional approval, but Republicans are expected to try and sink it with legislation that would block Obama from lifting sanctions Congress has previously put in place. The president has vowed to veto any such bill, and it would take a two-thirds majority in each house of the Republican-controlled Congress to override him.

As a result, the prospect is for a two-month campaign by the administration to find at least 34 senators or 146 House members to prevent a veto override.

On the other side of the political divide, some Republicans charged that Congress has not received documents concerning an alleged side deal between Iran and the International Atomic Energy Agency.

In a statement issued Monday, Sen. Tom Cotton (R-Ark.) and Mike Pompeo (R-Kan.) said that in a recent meeting with IAEA officials, they had been told that two side deals “will remain secret, and will not be shared with other nations, with Congress or with the public.” One deals with inspection of Iran’s Parchin military complex, they said, and the other deals with resolving disputes over “possible military dimensions of Iran’s nuclear program.”

Susan Rice, Obama’s national security adviser, acknowledged that the text of the side deal between the IAEA and Iran over past military activity wouldn’t be given to Congress. “These documents are not public,” Rice said, adding that the U.S. was satisfied with the agreement and would brief Congress about its contents.

House Speaker John Boehner (R-Ohio) promised tough questions from lawmakers at the sessions. “A bad deal threatens the security of the American people — and we’re going to do everything possible to stop it,” he told reporters.

House Majority Leader Kevin McCarthy (R-Calif.) released a list of 21 reasons to oppose the deal, including: “The murderous Syrian President Bashar al-Assad called this deal a ‘great victory’ and congratulated Iran on their achievement.”

This article appeared in print on page 1 of the July 23rd, 2015 edition of Hamodia.