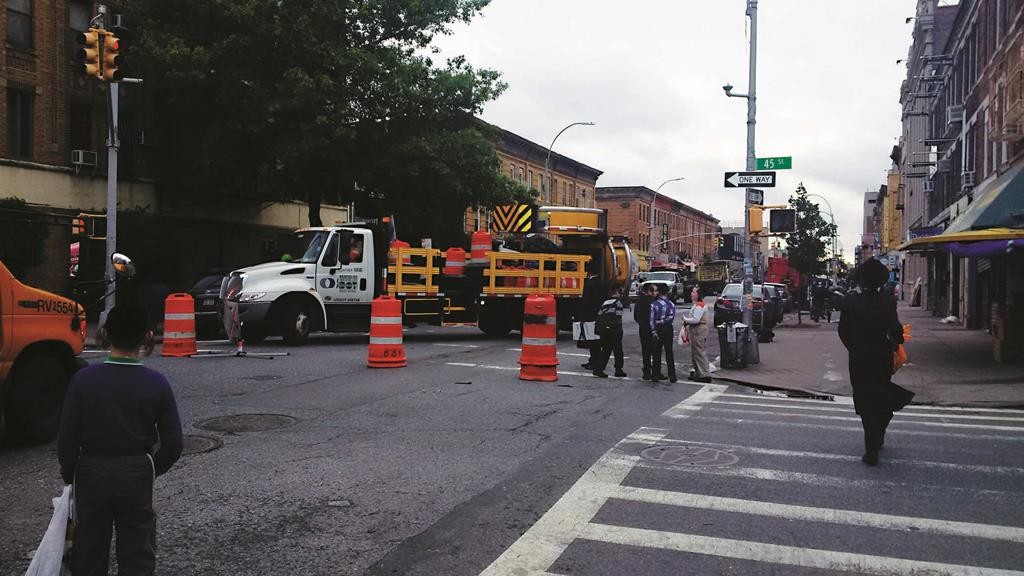 We want it repaved, but now?

That’s the sentiment of dozens of angry Boro Park residents who woke up Wednesday to the sound of milling and drilling along 14th Avenue.

The city’s transportation department issued a last minute warning on Tuesday that a central Boro Park avenue, between 39th and 45th streets, will be repaved from the dozens of craters and potholes created by the winter’s epic temperatures. That, residents said, was too short notice when shutting the heart of Boro Park during a school day.

“Dozens” of callers clogged Councilman David Greenfield’s office on Wednesday morning complaining about the disruption, according to a spokeswoman.

The Department of Transportation on Wednesday afternoon promised to stop all repaving in Boro Park until the end of June, when there are less cars on the road and school is out. This came after Greenfield issued a statement declaring himself “furious” with them for the repaving of a major commercial street without consulting the community on the timing.

Greenfield also wants the city to close down one street at a time when repaving, as opposed to Wednesday’s activity, when the entire avenue lower than 47th street — a larger area than what the city warned about — was closed. He suggested that working between 3:00 p.m. on Friday and sundown on Shabbos would work best for the community.

According to Barry Spitzer, the district manager of Community Board 12 which encompasses Boro Park, there is a standing agreement with the city to limit all resurfacing projects to the months of July and August.

However, due to funding concerns, the transportation department at the last minute went ahead with the 14th Avenue repaving ahead of schedule. Had it not been done now, Spitzer said, it would have had to wait until next year.

The DOT will finish repaving from 39th Street until Church Avenue but will leave Boro Park itself alone until July.

“When we will know the paving schedule, we will notify the community,” Spitzer said.