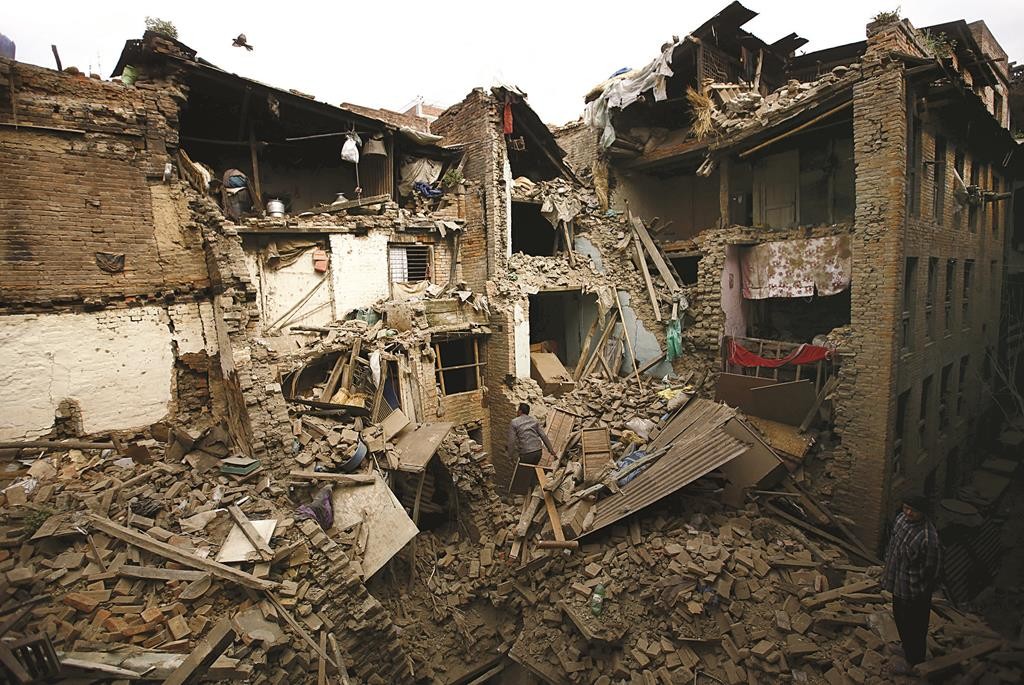 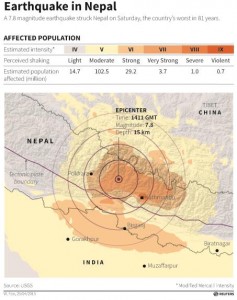 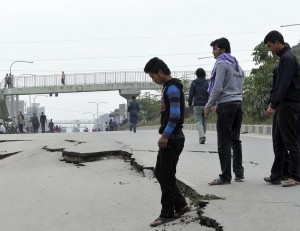 Shell-shocked and sleeping in the streets, tens of thousands of Nepalese braced against terrifying aftershocks Sunday while digging for survivors in the devastation wrought a day earlier by a massive earthquake that ripped across this Himalayan nation and killed more than 2,500 people.

Aid groups received the first word from remote mountain villages — reports that suggested many communities perched on mountainsides were devastated or struggling to cope.

Landslides hindered rescue teams that tried to use mountain trails to reach those in need, said Prakash Subedi, chief district official in the Gorkha region, where the quake was centered.

“Villages like this are routinely affected by landslides, and it’s not uncommon for entire villages of 200, 300, up to 1,000 people to be completely buried by rock falls,” said Matt Darvas, a member of the aid group World Vision. “It will likely be helicopter access only.”

Saturday’s magnitude 7.8 earthquake spread horror from Kathmandu to small villages and to the slopes of Mount Everest, triggering an avalanche that buried part of the base camp packed with foreign climbers preparing to make their summit attempts. At least 18 people died there and 61 were injured.

With people fearing more quakes, tens of thousands spent the day crowding in the streets and the night sleeping in parks or on a golf course. Others camped in open squares lined by cracked buildings and piles of rubble. Helicopter blades thudded periodically overhead.

Crows screeched as the ground shook with the worst of the aftershocks — magnitude 6.7. Panicked residents raced outdoors.

“We don’t feel safe at all. There have been so many aftershocks. It doesn’t stop,” said Rajendra Dhungana, 34 “Nepal should learn a lesson from this. They should realize proper buildings should be built. There should be open spaces people can run to.”

Nepal authorities said Sunday that at least 2,430 people died in that country alone, not including the 18 dead in the avalanche. Another 61 people died from the quake in India and a few in other neighboring countries.

At least 1,152 people died in Kathmandu, and the number of injured nationwide was upward of 5,900. With search-and-rescue efforts far from over, it was unclear how much the death toll would rise. Three policemen died during a rescue effort in Kathmandu, police spokesman Komal Singh Bam said.

The capital city is largely a collection of small, poorly constructed brick apartment buildings. But outside of the oldest neighborhoods, many in Kathmandu were surprised by how few modern structures collapsed in the quake.

While aid workers cautioned that many buildings could have sustained serious structural damage, it was also clear that the death toll would have been far higher had more buildings caved in.

Aid workers also warned that the situation could be far worse near the epicenter west of Kathmandu. The U.S. Geological Survey said the quake was centered near Lamjung, about 50 miles northwest of Kathmandu.

As planeloads of supplies, doctors and relief workers from neighboring countries arrived at Kathmandu’s airport, thousands of Indians lined up outside in hopes of gaining a seat on a plane returning to New Delhi.

The earthquake was the worst to hit the South Asian nation in more than 80 years. It destroyed swaths of the oldest neighborhoods of Kathmandu and was strong enough to be felt all across parts of India, Bangladesh, China’s region of Tibet and Pakistan.

Nepal’s worst recorded earthquake in 1934 measured 8.0 and all but destroyed the cities of Kathmandu, Bhaktapur and Patan.

Rescuers aided by international teams spent Sunday digging through rubble of buildings — concrete slabs, bricks, iron beams, wood — to look for survivors. Because the air was filled with chalky concrete dust, many people wore breathing masks or held shawls over their faces.

An American military plane left Delaware’s Dover Air Force Base for Nepal, carrying 70 people, including a disaster-assistance response team and an urban search-and-rescue team, and 45 tons of cargo, the Pentagon said.