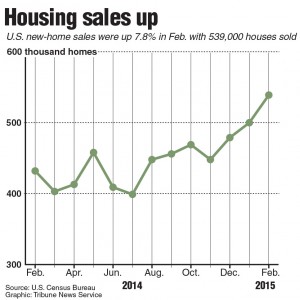 Sales of newly built homes surged to their highest level in seven years in February, a sign the U.S. housing market may pick up speed during the spring buying season.

The Commerce Department said Tuesday that new-home sales jumped 7.8 percent from January’s level and were 24.8 percent higher than February 2014.

Newly built homes sold at a seasonally adjusted annual rate of 539,000, smashing expectations on Wall Street. Analysts had expected sales to fall to a rate of 470 million, according to FactSet Research Systems Inc.

The gains came amid robust sales in the Northeast, where the number of deals more than doubled. Sales also rose in the South, climbing 10.1 percent, but dropped 12.9 percent in the Midwest and 6 percent in the West.

The positive report comes amid mixed signals for the housing market. Sales of previously owned homes rose in February, but remained sluggish. And builders broke ground on the fewest new housing units in a year.

Many analysts blamed the drop in construction on bad weather, but soft demand for expensive housing remains an issue.

Economists hope recent strong job growth will translate into a strong spring buying season, kickstarting a housing recovery that has slowed in the past year.

This article appeared in print in the March 25th, 2015 edition of Hamodia.