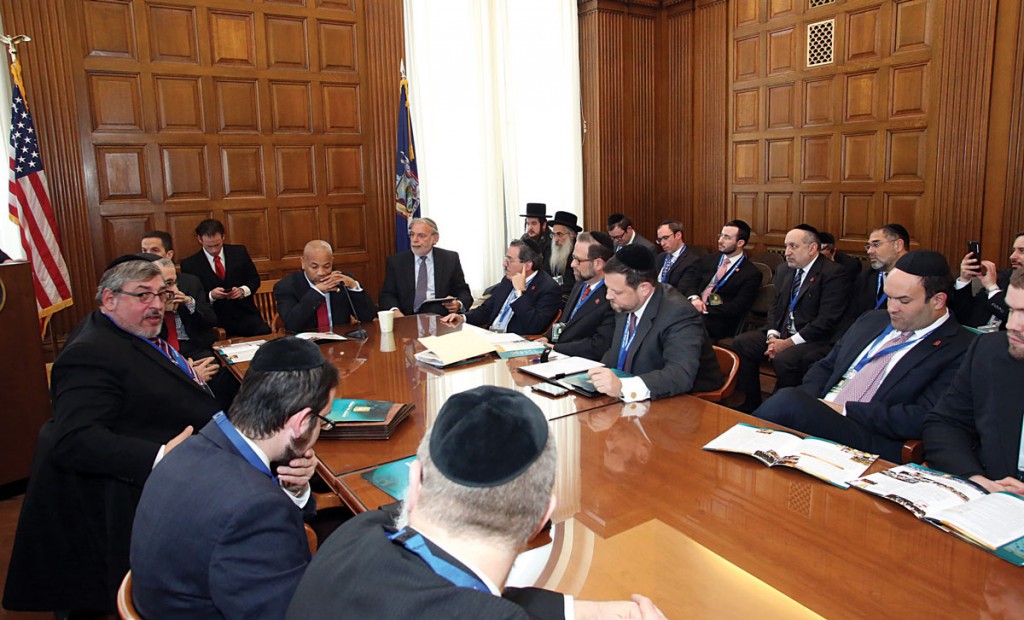 A potentially historic tuition aid bill and growing alarm over state oversight of a heavily Orthodox school board in Rockland County were the focus of the annual Agudath Israel of America mission to Albany on Wednesday.

Some 60 activists and yeshivah representatives from across New York State met the newly elected Assembly speaker, as well as top Cuomo administration officials and the Senate leadership.

“There cannot be an answer this year besides ‘yes’ on the tax credit,”Chaskel Bennett, an Agudah trustee, told a dozen Assembly members during a lunch in the speaker’s office following the day’s meetings. “We’ve heard enough ‘noes,’ we’ve heard enough ‘next times.’”

The group began the day meeting Speaker Carl Heastie, the first official get-together with the Bronx democrat since he was elected last month.

At an event in Boro Park on Sunday, Heastie had jokingly suggested that he needs to brush up on his Yiddish. On Wednesday, Shai Markowitz of Agudath Israel presented the speaker with a copy of The Easy Shmeezy Guide to Yiddish.

“By the next meeting I’ve got to learn some words,” Heastie joked.

The discussions at all three meetings were similar. They were headlined by the Education Investment Tax Credit, which would allow $100 million to $150 million in tax credits for education, including for non-public schools.

“Frankly,” said Rabbi Chaim Dovid Zwiebel, Agudah’s executive vice president, “the notion is very offensive to us that Orthodox Jews cannot run a school board in an equitable way simply because they send their children to Yeshivas rather public school.”

“I’ve looked at it so closely,” said Assemblyman Dov Hikind, “and something there is deeply wrong.”

“It’s turning into a dangerous situation,” observed Shlomo Werdiger, chairman of Agudah’s board of trustees.

From conversations with key elected officials, Agudah leaders suggested that they had made progress towards defeating the bill, which was proposed by Sen. David Carlucci and Assemblywoman Ellen Jaffe, both Rockland Democrats.

“The main thing we came here for was to show that East Ramapo is not a local issue; it shows that we are all concerned about it across the state,” said Rabbi Shmuel Lefkowitz, Agudah’s vice president for community affairs. “I think we accomplished that.”

On the tuition aid bill, Heastie says he is a supporter, having signed on last year as a co-sponsor. The importance of the bill in helping yeshivah parents was impressed on him by a series of speakers.

“The biggest issue for us,” said Leon Goldenberg, an Agudah trustee from Flatbush, “is EITC.”

Goldenberg called the bill’s price a “drop in the bucket” compared to the overall $22 billion requested for education in the state this year, “but it can make the difference if a school can stay open or will close,” he said.

Also looming large in the day’s agenda was increased funding for security in light of recent terror events worldwide and larger payments for the Comprehensive Attendance Policy, a state mandate to make sure that all students attend class. The state owes about $350 million but pays about $15 million a year.

“The time has arrived once and for all to pay back this debt,” Rabbi Zwiebel said.
Drawing attention to terror attacks on Jewish sites in Crown Heights, Paris, Denmark, Israel and Belgium, delegates said that it was imperative that yeshivos be helped by the state in protecting their facilities.

Heastie said he did not want to get into how much the Assembly would agree to on both the tuition aid and CAP but said he expected a “positive” solution.

At the Senate meeting, Skelos emphasized that the tuition aid bill must pass, and would not agree to tie it to passage of the DREAM Act giving tuition aid to illegals and the overall Tuition Assistance Program — as Cuomo suggested in his budget proposal.

“The governor, when he was in Boro Park before the election, made a commitment to pass it,” Skelos said. “Quite frankly, he should do it and not do all these tie-ins.”

“We believe that these are issues that should be able to stand alone,” Flanagan affirmed.

Sen. Simcha Felder, a Brooklyn Democrat who sponsored the bill along with Sen. Marty Golden, urged participants of the mission to lobby the Assembly and governor’s office to pass it.

“The fact remains that the Assembly did not pass the bill last year,” Felder said. “The governor and the Assembly deserve all the attention that we could give them.”

Skelos told the assembled, “We have to keep the focus on the tax credit and just keep the calls coming in.”