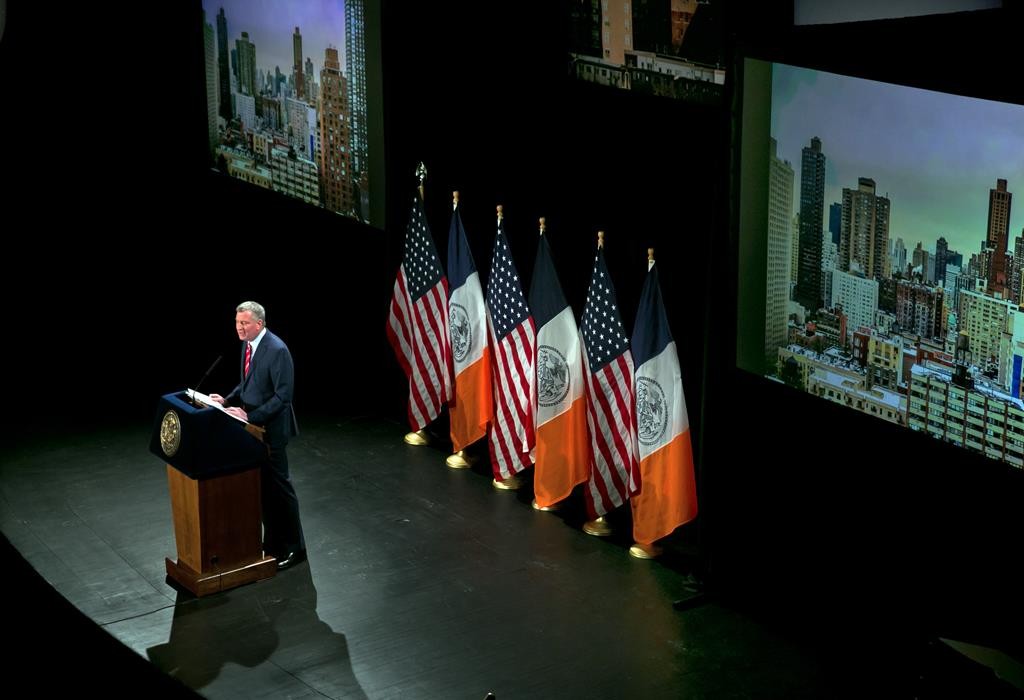 Mayor Bill de Blasio used his annual State of the City speech Tuesday to outline a plan to build hundreds of thousands of new affordable homes in New York City, an ambitious proposal he hopes will combat income inequality and change the face of neighborhoods across the nation’s largest city.

“If we do not act — and act boldly —New York risks taking on the qualities of a gated community,” de Blasio said. “A place defined by exclusivity, rather than opportunity. And we cannot let that happen.”

The plan has no shortage of big ideas.

It aims to develop 160,000 market-rate apartments while also building or preserving 200,000 affordable housing units. It calls for linking far-flung parts of the city with a new ferry service. And it hopes to build an entirely new neighborhood atop a much coveted rail yard in Queens, a controversial plan that received opposition from Gov. Andrew Cuomo within hours of its inception.

De Blasio, a Democrat, spoke for more than an hour at a Manhattan college, eschewing the laundry list of campaign-style promises that usually dot the State of the City speech, instead opting to tackle one big topic, housing, while linking it to his overarching agenda of narrowing the divide between New York City’s rich and poor — what he calls the “tale of two cities.”

For most New Yorkers, housing costs are their biggest monthly expense, and as real estate prices soar across the city, many New Yorkers can no longer afford to live in the city they call home, de Blasio said.

De Blasio’s housing plan, the biggest in the city’s history, will for the first time use mandatory zoning laws that require developers to include some affordable housing units as a condition of construction for all major projects. That process is being studied for six neighborhoods across the city. De Blasio also signaled a new effort to protect housing for seniors, veterans and artists.

He also asked the state Legislature to strengthen rent regulations that affect monthly payments for the 1 million rent-regulated apartments in the city.

But de Blasio may not receive much help from Albany.

His closest ally, Shelly Silver, gave up his powerful Assembly speakership this week and the mayor has fought several bruising fights with Cuomo, a fellow Democrat, over his agenda in 2014. A similar pattern is showing early signs of unfolding again this year.

A centerpiece of de Blasio’s housing plan is the development of Sunnyside Yards, which is controlled by the state-run Metropolitan Transportation Authority and is used by the commuter rail system and Amtrak. The mayor proposed building a platform atop the rail yards, on which he would create an entirely new neighborhood that could be home to 11,250 affordable units.

Two hours later, Cuomo’s office issued a statement suggesting that idea may be a non-starter.

“The M.T.A. uses Sunnyside Yards as an important facility for our transportation system, and it is not available for any other use in the near term,” said Melissa DeRosa, a spokeswoman for the governor.

Cuomo also indicated his opposition to de Blasio’s call for an increase to the minimum wage to more than $13, which the mayor again demanded Tuesday.

The mayor’s housing plan calls for increased density and taller buildings, and he noted that more residents could put a strain on existing public transportation links. So, in addition to calling for the creation of 13 new express bus lines, he proposed a new five-borough ferry plan to launch in 2017 that would, along with the existing East River ferry service, link neighborhoods like Coney Island, Astoria, Queens, the South Bronx and Staten Island.

City officials said riders would pay what it costs to board the subway — now $2.50 — and that $55 million in capital funds would be used to cover construction costs. The program, which officials say could serve 4.5 million people a year, would also receive $10 million to $20 million annually in city subsidies.

The speech did not, however, include any mentions of the biggest crisis of de Blasio’s mayoralty to this point: his recent battles with the police unions in the wake of the Eric Garner grand jury decision and the fatal shooting of two police officers.