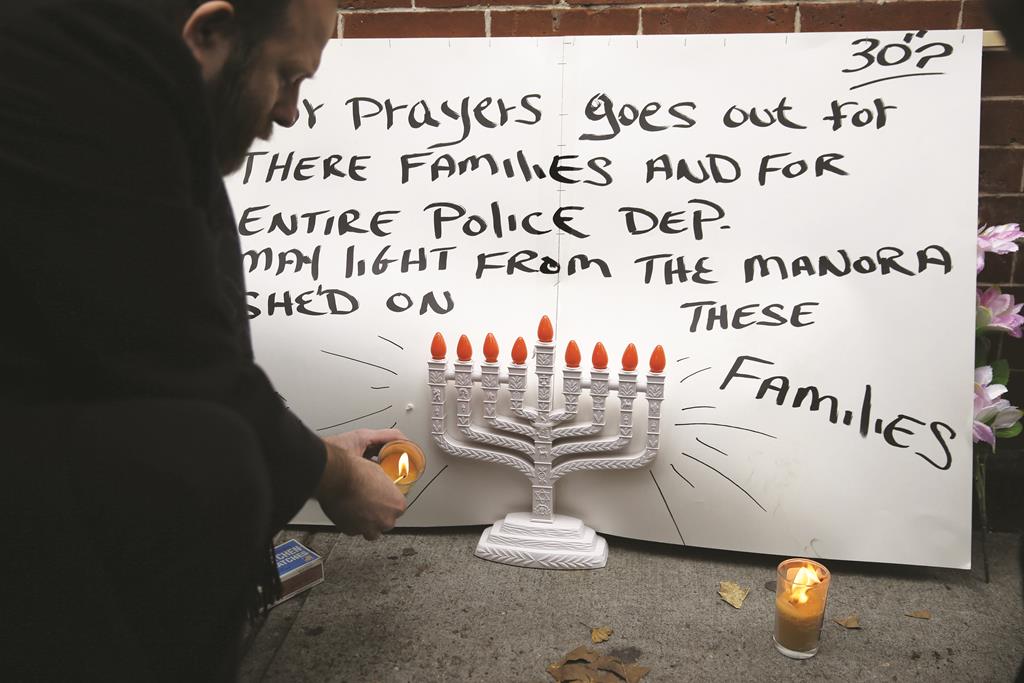 Big-city police departments and union leaders warned officers Sunday to change their routines and insist on extra backup after a gunman who had ranted online about the slayings of black men killed two New York patrolmen sitting in their squad car.

The killings on Saturday dramatically escalated tensions that have simmered for months over the deaths of young black men.

Investigators were trying to determine if the killer really had a deep sympathy for the protests or simply latched on to the cause for the final act of a violent spree. Officers Rafael Ramos and Wenjian Liu were gunned down at close range in their patrol car in Brooklyn on Saturday by Ismaaiyl Brinsley, who then took his life. Before the attack, Brinsley, 28, wrote on an online account: “They take 1 of ours, let’s take 2 of theirs.”

The siege mentality was evident in several memos circulating among the rank and file at the 35,000-officer New York Police Department, the nation’s largest.

A union-generated message warned police officers they should respond to every radio call with two cars — “no matter what the opinion of the patrol supervisor” — and to not make arrests “unless absolutely necessary.” The president of the detectives’ union told members in a letter to work in threes when out on the street, wear bulletproof vests and keep aware of their surroundings.

“Cowards such as yesterday’s killer strike when you are distracted and vulnerable,” the letter read.

Another directive warned officers in Newark, New Jersey, not to patrol alone and avoid people looking for confrontations with them. At the same time, a memo from an NYPD chief asked officers to avoid fanning rage within the ranks by limiting comments “via all venues, including social media, to expressions of sorrow and condolence. … Even in our most difficult times, we will remain consummate professionals.”

The shooter traveled by bus to New York City after wounding a female in Baltimore. Once he arrived, he approached a parked squad car and opened fire, striking Officers Rafael Ramos and Wenjian Liu in the head.

The slayings come at a tense time. Police in New York and nationwide are being criticized for their tactics, following the July death of Garner, who was stopped on suspicion of selling loose, untaxed cigarettes.

Demonstrators around the country have staged die-ins and other protests since a grand jury decided on Dec. 3 not to indict the officer in Garner’s death, a decision that closely followed a Missouri grand jury’s refusal to indict a white officer in the fatal shooting of Brown, an unarmed black 18-year-old.

Bratton and De-Blasio attended a church prayer session on Sunday, where Cardinal Timothy Dolan called for calm. He asked the police commissioner to tell his troops that “we love them very much, we mourn with them, we need them, we respect them, we’re proud of them and we thank them.”

Brooklyn Borough President Eric Adams visited a makeshift memorial at the site of the slayings, calling on protest organizers to “hold off on any type of protest until these officers are laid to rest in a peaceful manner.”

At an appearance with Al Sharpton where he denounced violence against police, Garner’s mother expressed her dismay.

“I’m standing here in sorrow about losing those two police officers that was definitely not our agenda,” Gwen Garner said.

In the wake of the ambush, former New York Mayor Rudy Giuliani lashed out at New York Mayor Bill de Blasio, President Barack Obama and Attorney General Eric Holder. Speaking on Fox News, Giuliani said: “We’ve had four months of propaganda starting with the president that everybody should hate the police.”

“They have created an atmosphere of severe, strong, anti-police hatred in certain communities, and for that, they should be ashamed of themselves,” he said.