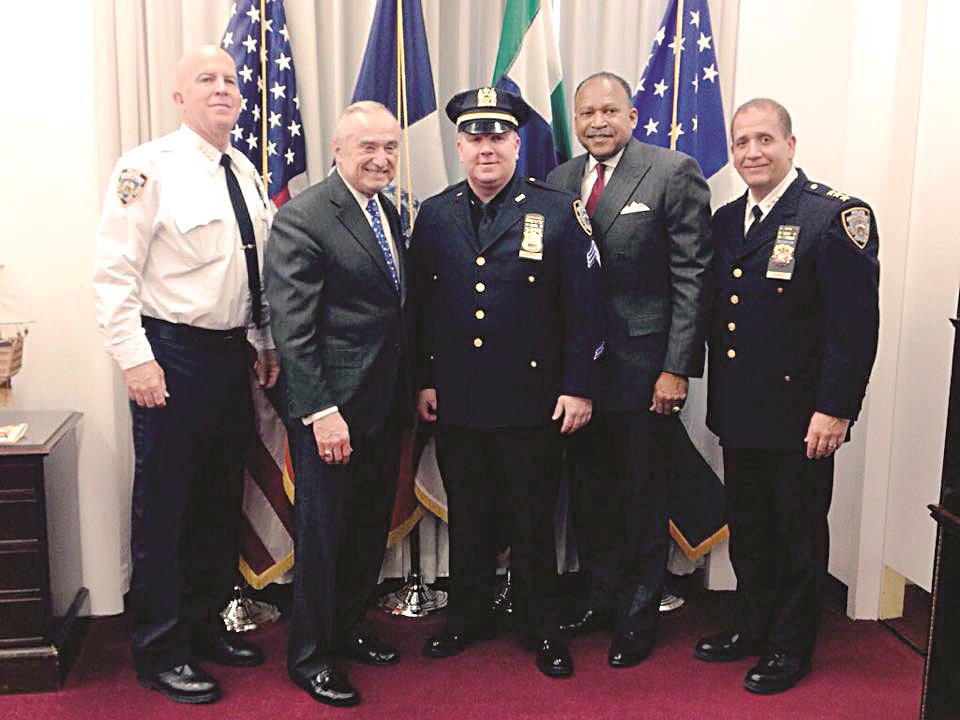 Six people who joined a massive demonstration in New York City over recent police-involved deaths were being sought Monday after police spotted them on amateur video swarming two officers who were trying to make an arrest.

The three men and three women grabbed, kicked and punched the two New York Police Department lieutenants on Saturday night as the pair struggled to stop another protester from throwing a trash can off an elevated walkway on the Brooklyn Bridge at fellow officers policing a march on the roadway below, police said.

Police Commissioner William Bratton said at a news conference the NYPD planned to seek the public’s assistance in identifying the six suspects by publicizing photos of them taken from a video posted online.

“We do not take attacks on police officers lightly — never have, never will,” Bratton said.

The incident on Saturday night briefly marred a mostly peaceful protest in New York City that drew tens of thousands of demonstrators. The march was by far the largest of several protests this month in response to a grand jury’s decision on Dec. 3 to refuse to indict a police officer in the apparent chokehold death of Eric Garner during an arrest in July on Staten Island.

The two plainclothes lieutenants were treated for bumps and bruises, including a broken nose. The protester they stopped, Erik Linkser, managed to flee but was later arrested.

Linkser, 29, was released after pleading not guilty to charges of assaulting police and resisting arrest. His lawyer denied the charges.

There have been six arrests for assaults on police officers during the protests this month, Bratton said. The city has spent $23 million on overtime to secure the events, he added.

The police commissioner also took sharp aim at union police officials who have accused Mayor Bill de Blasio of not backing the rank and file amid the fallout from Garner’s death.

One union official called the mayor a “total nincompoop” for using the word “allegedly” in a statement about the bridge encounter. Another official has asked his membership to sign a petition calling for the mayor to be barred from attending funerals of officers killed in the line of duty.

Bratton called the nincompoop remark “a cheap shot” and the funeral petition “a step too far.”

The unions “have grievances, but those grievances need to be dealt with at the bargaining table, without personalizing it,” he said. “We’re professionals. We don’t need to engage in that type of language.”

De Blasio also was the focus of a group of demonstrators on Monday night. About 50 protesters gathered outside Gracie Mansion, the mayoral residence, calling on him to take steps including ending the policy of “broken windows” policing, which means going after low-level crimes as a means of deterrence, to keep people from committing more serious offenses. Other demands included passage of the “Right to Know” act, which would require officers to tell people they’ve stopped that they have the right not to consent to a voluntary search.

De Blasio was hosting a Chanukah event at the residence. Many of those attending kept away from the protesters, with a few stopping to get fliers.