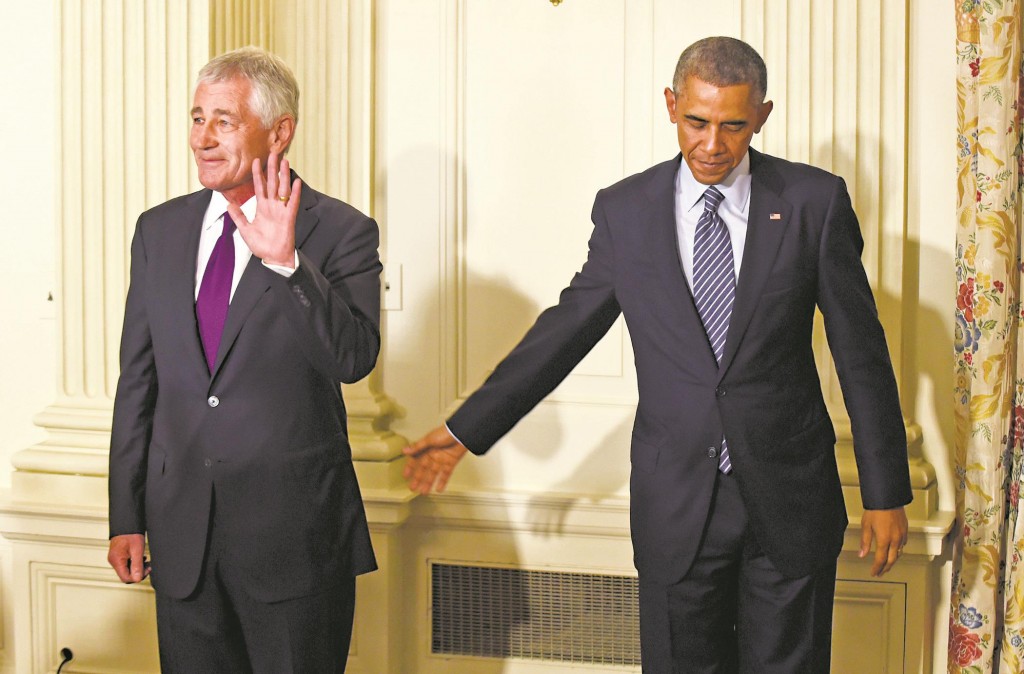 It was the first major change to Obama’s Cabinet since his Democrats were routed in midterm elections three weeks ago, and Republicans, who now control both houses of Congress, are looking for a new approach from the White House.

Hagel was appointed less than two years ago as Obama pushed his signature program of winding down wars in Afghanistan and Iraq, a process now being upended with U.S. re-engagement in Iraq and greater military cooperation with Kabul.

He had privately expressed frustration to colleagues at the administration’s strategy toward Iraq and Syria and at his lack of influence over the decision-making process, a source familiar with the situation said.

Officials said publicly the decision for him to leave was mutual but privately others said he was forced out. “There’s no question he was fired,” said one source with knowledge of the matter.

Hagel raised questions about Obama’s strategy toward Syria in an internal policy memo that leaked this fall saying the president’s policy was in jeopardy due to its failure to clarify its intentions toward Syrian President Bashar al-Assad.

House Republican Speaker John Boehner said the change at the Pentagon “must be part of a larger re-thinking of our strategy to confront the threats we face abroad, especially the threat posed by the rise of ISIL (Islamic State).”

Senator John McCain, who is expected to become chairman of the Senate Armed Services Committee. which will vet the new nominee, called for changes in Obama’s defense policies.

McCain, a fierce critic of the president, told Reuters Hagel had been “very unhappy” about micro-management from the White House and did not believe that Washington had a strategy to combat Islamic State.