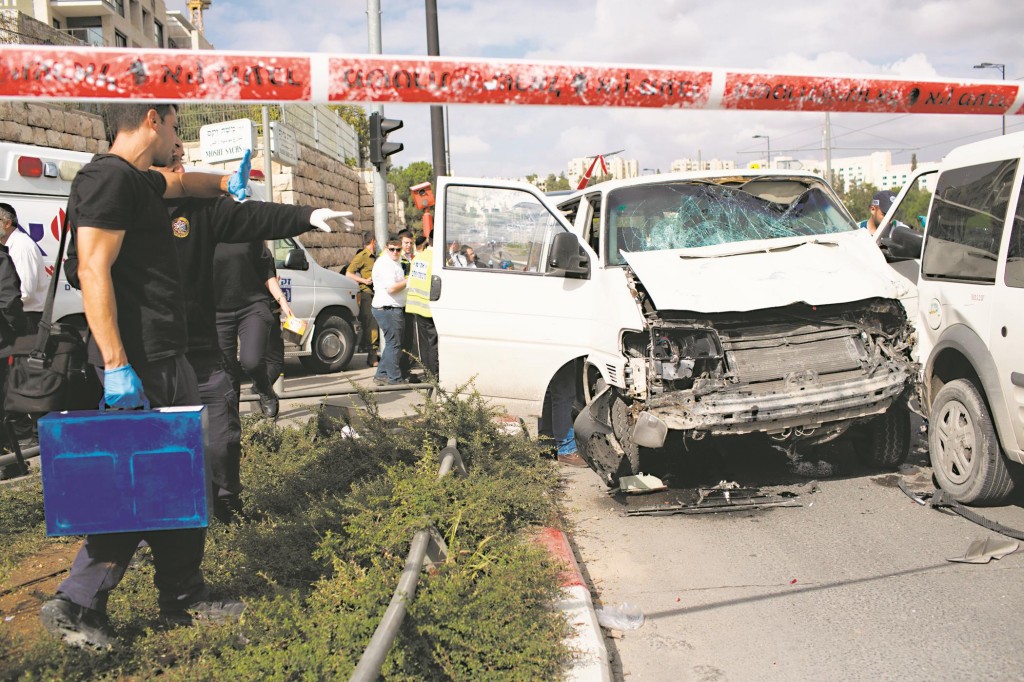 In the second such attack in Yerushalayim in two weeks, a Palestinian terrorist killed one person on Wednesday and wounded dozen of others before police caught and shot him.

A Border Police officer, Jidan Assad, 38, from the Druze village of Beit Jaan, was killed.

The Yerushalayim light railway was again the path of blood, as the driver slammed his white van into three paramilitary border policemen at a station on the edge of the Palestinian neighborhood of Shuafat.

After also crashing the van at the corner of Bar-Lev and Shimon Hatzadik Streets, the driver continued the rampage at nearby Rav Mozhe Zaks Street, where he struck at pedestrians with a metal rod before police units caught up with him.

“A border policeman, taking the initiative, drew his weapon and eliminated the terrorist,” Mayor Nir Barkat told reporters at the scene.

Police identified the attacker as Ibrahim al-Akri, a 38-year-old Palestinian, and said he had recently been released from prison after serving time for security offenses.

It was immediately evident that it was a terrorist attack, a deliberate act of murder, soon confirmed by Hamas, which took responsibility for it and praised the murderer as a hero.

Magen David Adom paramedic Ahuvia Stern, who responded to the emergency call, told Haaretz: “A man of about 40 was lying unconscious in the road with a bleeding head wound and extensive injuries … We put on tourniquets, sedated him and respirated him until we could transfer him to the ambulance that took him to Hadassah Hospital in Ein Karem.

“His condition worsened in the ambulance and we had to undertake resuscitation efforts, which continued in the trauma ward of the hospital. At that point, the doctors confirmed his death.”

The attack was almost identical to one two weeks ago, also committed by a Palestinian from eastern Yerushalayim who rammed his car into a crowded train station, killing a 3-month-old Israeli-American girl and a woman from Ecuador — not far from the scene of Wednesday’s attack.

Prime Minister Binyamin Netanyahu charged that the attack was “a direct response to incitement by Mahmoud Abbas and his colleagues in Hamas.”

Netanyahu held a special security assessment on Wednesday night with the defense minister, internal security minister, chief of police and other officials.

U.S. Secretary of State John Kerry labeled it a “terrorist act.” Speaking ahead of a meeting with Jordan’s foreign minister in Paris, Kerry told reporters, “That is not just a terrorist act and an … atrocity, but it only makes matters worse. It only raises tensions.”

“We urge everybody to try to step back and find a way to create enough calm and enough space to be able to negotiate these difficult issues,” he added.

In Israel, other officials added their condemnations.

He added that “Mahmoud Abbas has not changed and will not change, and he will continue to blacken the name of the state of Israel and incite the Palestinian population against it … We will nip Palestinian terrorism in the bud and lay our hands on its perpetrators and dispatchers.”

Addressing the international community in a letter, Foreign Minister Avigdor Lieberman made the same point, referring to “a leadership such as the Palestinian Authority, that glorifies and encourages terror, creates a ‘terrorcratic’ entity that only leads to more bloodshed.”

In the U.S., Conference of Presidents leaders Robert Sugarman, Chairman; and Malcolm Hoenlein, Executive Vice Chairman/CEO; condemned the attack: “At a time when the international community is providing assistance and countries are taking symbolic steps to recognize a Palestinian state, President Abbas and others must be held to account. Israel has demonstrated great restraint while its holiest places come under attack and civilian populations going about their daily lives are assaulted. We urge our government to make clear to President Abbas that the incitement must stop immediately and that those responsible for supporting or engaging in acts of violence will be brought to justice.

“It is also important that he renounce the calls for a third intifada and take steps to restore order on the Temple Mount and all of Yerushalayim.

“The light rail service has benefited both Arab and Jewish communities, bringing them together on a daily basis. These attacks damage residents of all communities and make the efforts to bring down barriers far more difficult,” the Conference said.

The Israeli government took careful note of international reaction, and Government Press Office Director Nitzan Chen summoned the Israel bureau chief of the Turkish Anadolu Agency for a consultation on coverage of the incident.

Anadolu had reported that a “Palestinian man shot dead by the Israeli police” without explaining that he had just murdered an innocent person, and wounded many more.

Journalists who engage in incitement and who disseminate misleading information that may put lives at risk are liable to have their GPO cards revoked.