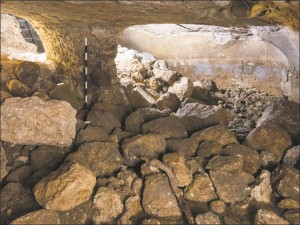 A mikveh that archaeologists believe is about 1,900 years old was recently uncovered at Ha-Ela Junction in excavations prior to widening Highway 38 in Israel.

An enormous water cistern estimated at 1,700 years old was also revealed nearby in which graffiti was discovered that had been engraved on the reservoir’s ceiling by Australian soldiers during World War II.

According to Yoav Tsur, excavation director of the Israel Antiquities Authority, “We exposed a mivkeh in which there are five steps; the fifth step being a bench where one could sit at the edge of the immersion pool. We found fragments of magnificent anicient pottery vessels, among them lamps, red burnished vessels, a jug and cooking pots.”

During the course of the excavation the archaeologists were surprised to discover some contemporary yet intriguing graffiti engraved on the ceiling of the cistern, indicating the place had been exposed until the 1940s.

Two English names were carved in the rock: Cpl Scarlett and Walsh. Next to the names are carved the initials RAE and two numbers — NX7792 and NX9168. The date 30/05/1940 appears below the graffiti. The initials Cpl signify the rank of corporal.

An inquiry revealed that the numbers engraved inside the cistern are actually soldiers’ serial numbers and that RAE stands for Royal Australian Engineers.

It seems that the two were members of the Australian Sixth Division, which was stationed in the country at the time of the British Mandate and was undergoing training prior to being sent into combat in France.

This article appeared in print on page 7 of the October 8th, 2014 edition of Hamodia.