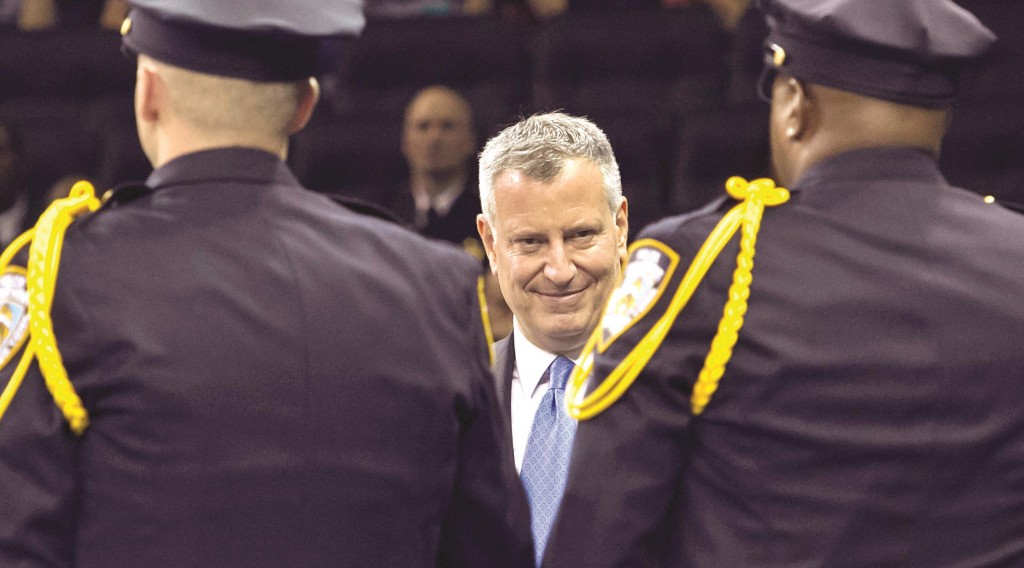 Mayor Bill de Blasio’s relationship with police, already strained by accusations he sided with frequent NYPD critic Al Sharpton over the death of an unarmed suspect while in custody, suffered another hit with revelations a top aide is close to a convicted killer who has often referred to officers in a derogatory way.

Police unions say it’s only the latest incident that shows the mayor’s lack of support for the 34,000-officer force. And even some de Blasio allies acknowledge the mayor could do a better job of leading the department he is simultaneously trying to reform.

“This is difficult terrain, particularly for a new mayor,” said Eugene O’Donnell, a professor of police studies at John Jay College of Criminal Justice who was on the mayor’s transition team. “Morale has been low on the force and it’s only getting worse.”

Following a pair of mayors who were largely lockstep with the NYPD, de Blasio was viewed suspiciously by police from the beginning with his fierce push to end stop-question-frisk, and when he called a police official to inquire about the arrest of an ally.

And the latest strain was the revelation that Rachel Noerdlinger, first lady Chirlane McCray’s chief of staff and a highly visible face at City Hall, is close to Hassaun McFarlan, who pleaded guilty in a 1993 shooting and later served time in prison.

The city’s largest police union has called for Noerdlinger’s dismissal.

“It raises serious questions about her judgment and character and the quality of the counsel she provides to City Hall,” said union head Pat Lynch.

Although de Blasio defended Noerdlinger, saying an internal investigation showed no wrongdoing, the controversy shows no signs of abating. It was revealed that she recently joined McCray for a high-level NYPD crime-fighting briefing while the city’s Department of Investigations opened an investigation into her.

But it’s de Blasio’s close ties to Sharpton — who is also Noerdlinger’s former boss — that has fueled much of the unions’ anger.

Sharpton spent months denouncing the NYPD for the death of Eric Garner, a black man who died during an arrest attempt in July. In a City Hall summit called to ease tensions, de Blasio sat awkwardly between Police Chief William Bratton and Sharpton, who railed against the NYPD.

Police unions were outraged that Sharpton was given equal billing with Bratton. That became a central point in a full-page ad taken out by the Sergeant’s Benevolent Association in The New York Times opposing the city’s bid to host the 2016 Democratic National Convention.

“The mayor has provided a public platform to the loudest of the city’s anti-safety agitators,” wrote union president Ed Mullins. The ad also claimed that City Hall’s “diminished support for police officers translates directly into crime spikes and drops in quality of life.”

Experts say there are political risks for de Blasio if the complaints grow.

“The perception that City Hall and the police are not on the same page does not usually sit well with voters,” said Costas Panagopoulos, political science professor at Fordham University.

The perception that Sharpton has an outsized voice at City Hall has penetrated even the city’s elite, as evidenced by a roast at the white-tie Alfred Smith dinner Wednesday night.

“What a crowd tonight,” Home Depot founder Kenneth Langone said. “Although I don’t see the person in charge of the NYPD up here tonight, Al Sharpton.”

De Blasio, who was sitting nearby, smiled. And when the dinner ended, he hustled to a party for Sharpton’s 60th birthday, telling reporters, “The more people criticize him, the more I want to hang out with him.”