Intruder Had 800 Rounds of Ammunition in Car 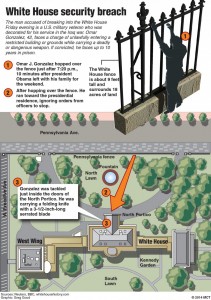 A decorated Iraq war veteran who scaled a fence on Friday night and got into the White House had over 800 rounds of ammunition in his car and was arrested in July with a sniper rifle and a map marking the executive mansion, a federal prosecutor said on Monday.

Omar Gonzalez, 42, was also stopped, but not arrested in August walking by the White House with a hatchet in his waistband, federal prosecutor David Mudd told a federal judge.

The previous interactions that Gonzalez had with the Secret Service is part of a sweeping internal review of how the agency failed to stop him from getting inside the White House, and whether more security is needed, White House spokesman Josh Earnest told reporters.

The incident with Gonzalez follows a number of security lapses involving the president’s security detail, including a scandal in 2012.

Asked on Monday whether he has confidence in the agency, President Obama said: “Secret Service does a great job. And I’m grateful for the sacrifices they make on my behalf and my family’s behalf.”

Gonzalez faces charges of unlawfully entering a restricted building or grounds while carrying a “deadly or dangerous weapon.” He was carrying a knife when he entered the White House. The charge carries up to 10 years in prison.

He consented to a search of his car after his arrest, and officers found more than 800 rounds of ammunition, two hatchets and a machete.

Mudd said Gonzalez’s “preoccupation with the White House and accumulation of large amounts of ammunition in apparently a short period of time renders him a danger to the president,” in arguing that he not be released on bond.

Although Obama and his family were not home at the time, the incident raised questions about the Secret Service’s White House security procedures.

Representatives for the Secret Service did not respond to a request for comment on Monday.

“I encourage all of us to not rush to judgment about the event and not second-guess the judgment of security officers who had only seconds to act, until all the facts are in,” Homeland Security Secretary Jeh Johnson said in a statement.

The agency is considering ways to beef up staffing and expand the security zone around the White House to keep tourists and other members of the public farther away, Earnest said.

One possible measure includes blocking the sidewalks around the White House or screening tourists before allowing them to use the walkways. Additionally, visitors to the complex, now screened at the entrance gates, could instead be screened blocks away, the New York Times and Washington Post reported.

This article appeared in print on page 8 of the September 23rd, 2014 edition of Hamodia.