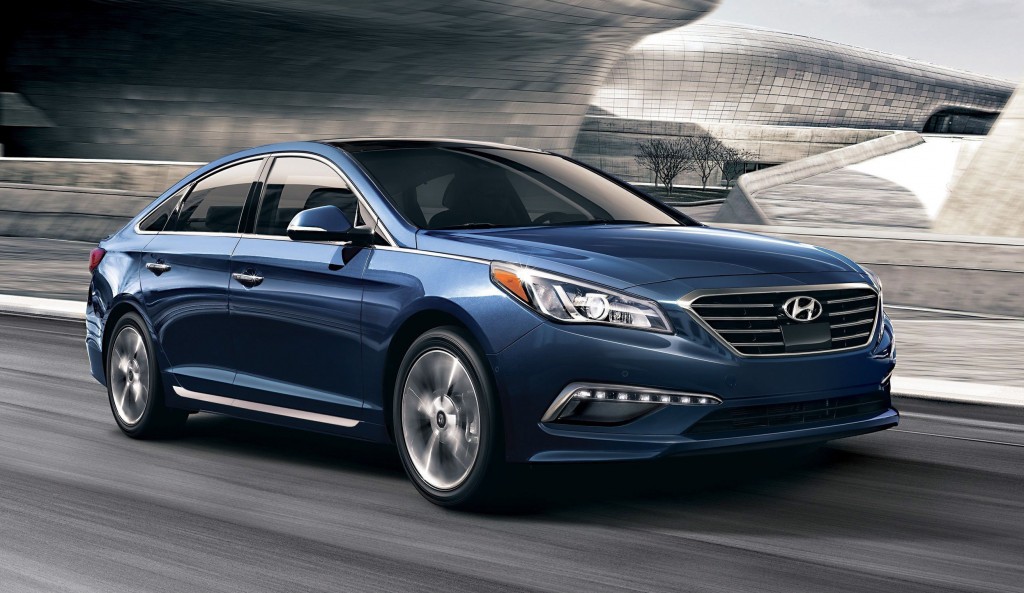 The Hyundai Sonata is a tough act to follow. Automakers like Toyota, Nissan, Ford and Chevrolet learned that when the revolutionary sixth-generation Sonata went on sale in 2010 as a 2011 model.

The sleek midsize sedan’s value, looks and fuel economy won Hyundai legions of new buyers, carried the brand to new heights and sent other automakers back to the drawing board.

Now it’s Hyundai’s turn to feel the pressure, as the three-star 2015 Hyundai Sonata tries to fill its predecessor’s tire tracks.

The new Sonata makes Hyundai competitive with the best new midsize sedans, but falls short of the leaders.

Sonata prices start at $21,150 for a base model with a 185-horsepower, 2.4-liter four-cylinder engine. A sporty, optional 245-hp 2.0-liter turbocharged engine in the Sonata 2.0T starts at $28,575. All Sonatas come with a six-speed automatic transmission.

Hyundai will add hybrid and high-mpg models of the Sonata with other drivetrains over the next several months.

None of its competitors match the Sonata’s features for that price, but Hyundai’s execution of some features is not up to the standard of leading models. The adaptive cruise control accelerates and brakes the car less smoothly, for instance. The lane-departure alert is fussy, sounding too often at highway speeds. I turned it off after a few miles, the last thing you want with a safety feature.

The Sonata’s fuel economy trails leading midsize sedans. The Hyundai’s EPA rating of 24 mpg in the city, 35 on the highway and 28 combined trails the combined rating of the more powerful 2.5L Malibu and equally powerful four-cylinder Accord, Altima and Mazda6. The Sonata’s combined mpg matches the 1.5L Ecoboost Fusion, 2.4L Chrysler 200, 1.8L Passat and 2.5L Camry.

The engine delivers acceptable performance around town and on the highway.

The 2015 Sonata is noticeably quieter than its predecessor, an improvement owners will appreciate. Highway noise is now comparable to other good family sedans.

The passenger compartment is one of the largest in the segment. There’s plenty of headroom, despite the car’s low profile. The rear seat provides good leg room. The trunk is large and accommodating.

The interior materials look good, with light-colored leather and simulated wood in my test car. However, there’s less padding on the doors, dash and armrests than the Chrysler 200 and some other competitors offer.

The voice-recognition system works well. The gauges and controls are clear and simple. There’s no good place to put USB and 12-volt devices, just an open bin at the base of the center stack that looks sloppy with a phone, iPod and cords in it. My iPod switched from shuffle mode to playing my library track-by-track every time I turned the car off.

The 2015 Sonata lacks its predecessor’s breakthrough appeal, but its price, looks and many available features keep Hyundai competitive with other midsize sedans.

Where assembled: Montgomery, Ala.