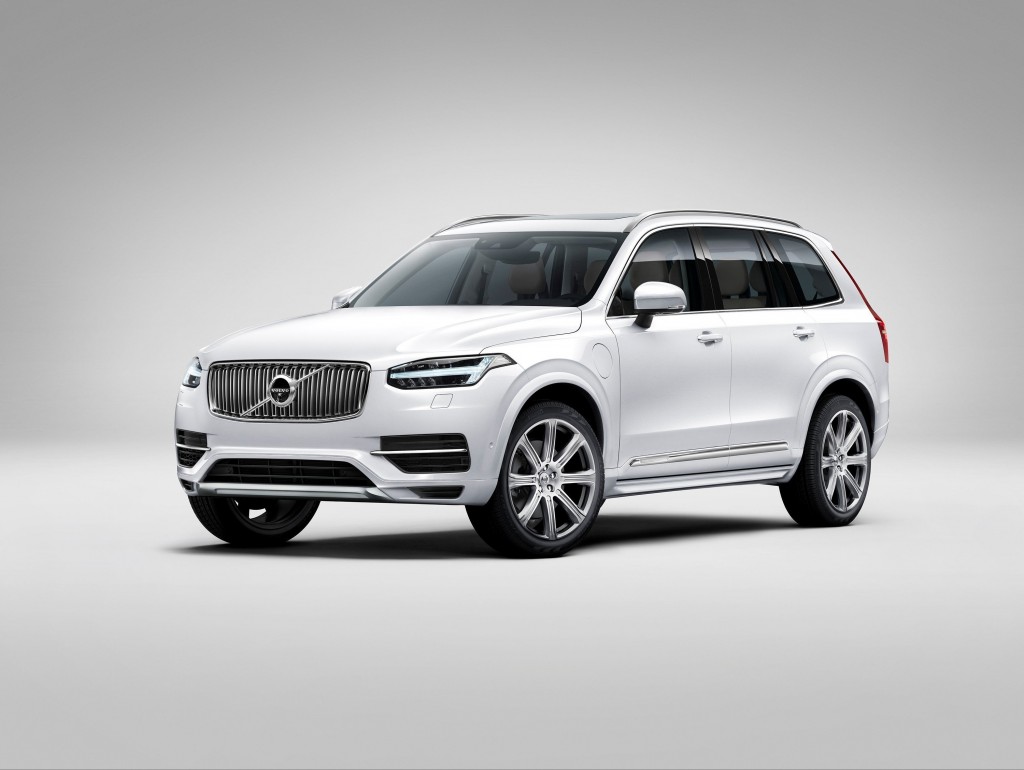 For the first time in four years — an eternity in the car business — Volvo has debuted an all-new vehicle, one that sets the course for a dramatic rebirth of the safety-oriented automaker.

The 2016 XC90 is the first vehicle conceived and designed since Volvo was bought by the Chinese company Geely in 2010. The crossover SUV kicks off a barrage of new products from the Swedish automaker, with eight more redesigned vehicles headed to dealers by the end of 2017.

“This is one of the most important days in our history,” said Hakan Samuelsson, President and CEO of Volvo. “We are not just launching a car but relaunching our brand.”

Volvo is hoping the XC90 and its future models will help the company’s global sales rebound dramatically. The automaker’s share of the U.S. luxury market has fallen from 8 percent in 2000 to 3.4 percent in 2013, according to Edmunds.com.

This second-generation XC90 is a three-row crossover that will start at $48,900 when it goes on sale next spring. Two versions will be available in the US, each with a four-cylinder engine that is both supercharged and turbocharged and an eight-speed automatic transmission.

The base T6 model has 316 horsepower, and the high-end T8 version adds a plug-in electric motor for 400 total horsepower and an extra dollop of efficiency.

Volvo is counting on Southern California’s being fertile territory for this version. The company plans a big presence at the 2014 LA Auto Show in November, where the XC90 will make its North American debut.

“This is a car for the U.S., and especially LA,” said Tony Nicolosi, Volvo’s North American chief. Safety has long been a hallmark for Volvo, and maintaining that reputation is crucial if Volvo wants to reestablish its place among the brutally competitive luxury marketplace.

“Volvo has done one of the best jobs in the industry in the last 50 years of establishing a clear image of what they stand for,” said Tom Libby, an analyst with IHS Automotive. “They need to maintain a leadership role in safety to keep that brand image.”

Standard systems on the XC90 include one that tightens seat belts and uses advanced seat cushioning to protect passengers if the vehicle leaves the road. This type of accident is the source of half of U.S. traffic fatalities, Volvo said.

The XC90 will also automatically brake if it turns into the path of an oncoming vehicle.

Volvo hopes the new XC90 and subsequent models lure those customers back, and it hopes to move slightly upmarket and more clearly define itself as the understated alternative to an Audi or a Mercedes.

“Volvo is perceived in the luxury world as being more academic,” Libby said. Volvo — Latin for “I roll” — started building cars in 1927 and began exporting cars to the U.S. in 1955. The company established its reputation as a leader in safety that decade by being the first automaker in the world to make three-point seat belts standard in all its cars.

By the 1980s, Volvo’s boxy sedans and wagons were beloved for being safe and were a good choice for buyers who perceived BMW or Mercedes as pretentious yuppie-mobiles.

The brand’s unique appeal drew Ford’s attention in 1999 while it was snatching up other high-end nameplates Jaguar, Land Rover and Aston Martin. Ford bought Volvo from its parent company that year for $6.5 billion.

After the financial crisis of 2008, Ford began looking to unload its prestige nameplates to focus on its core products. Ford found a buyer in Geely, a Chinese automaker that got its start in the 1980s building refrigerators. The $1.8 billion sale was completed in 2010.

Despite being the first mainstream automaker in the U.S. to be acquired by a Chinese company, Volvo still considers itself a Swedish brand.

Its global headquarters are still in Gothenburg, a coastal town on the other side of the country from Stockholm. The XC90 will be assembled there, too, with its engines built in Skovde, Sweden.

Rebooting an automotive brand is never a quick or easy process. The first step in Volvo’s transformation actually began last year, when the automaker introduced a new lineup of compact four-cylinder engines, which use either turbos or both turbos and superchargers for power that is equal to many six-cylinder rivals. By simplifying its engine options across its entire range of vehicles, Volvo dramatically cuts development and manufacturing costs.

The XC90 also represents the new face of Volvo in the literal sense, as the crossover’s look sets the tone for future Volvo vehicles. It’s highlighted by headlights with a distinctive T-shaped “Thor’s hammer” LED strip across the middle.

The bones of the new XC90 presage similar vehicles to come. The crossover is built on an all-new platform that is scalable, meaning Volvo can use it on subsequent models that will flood the marketplace over the next three years.

This includes new versions of the S80 full-size sedan, the XC60 mid-size crossover, the XC70 crossover station wagon and the S60 mid-size sedan.

“Volvo has to get back into the key segments, and the luxury market is very fragmented and extraordinarily competitive now,” Libby said.

Things will only get tougher in the immediate future, as other formerly niche luxury brands also look to grow. Think Jaguar/Land Rover, Lincoln and Acura.

Thus, Volvo’s long-term success won’t hinge on a single vehicle, but on a wholesale transformation of the Swedish brand.

“The XC90 by itself is not going to do it,” Libby said. “And Volvo is well aware of this.”