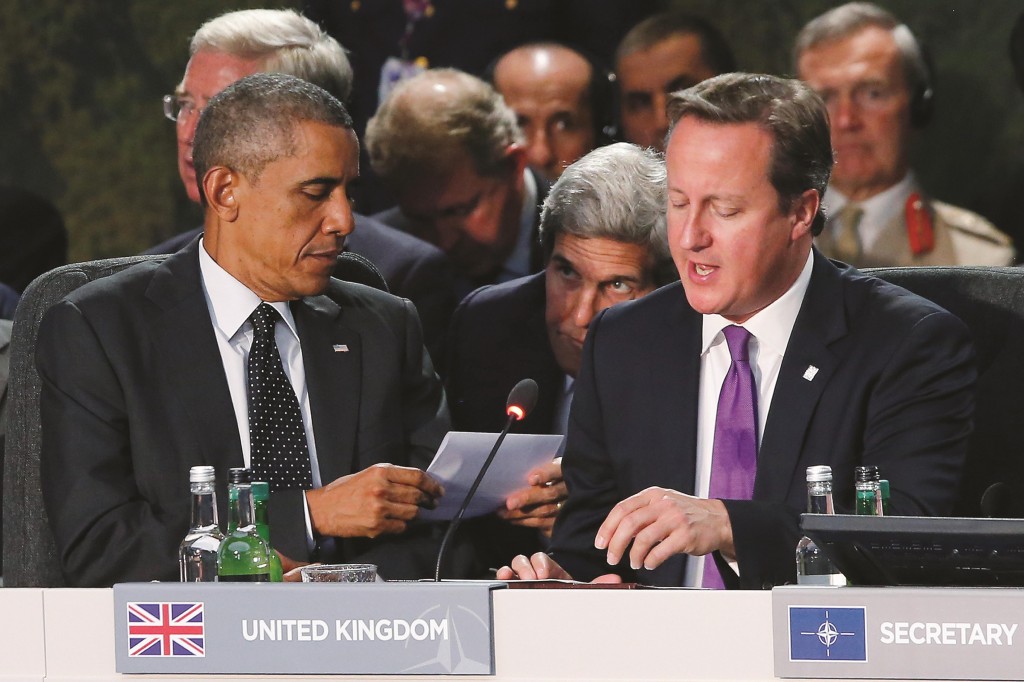 President Barack Obama and British Prime Minister David Cameron pressed fellow NATO leaders Thursday to confront the “brutal and poisonous” Islamic State group that is wreaking havoc in Iraq and Syria — and urged regional partners like Jordan and Turkey to join the effort as well.

As leaders of the Western alliance gathered for a two-day summit, Obama and Cameron worked to begin forming a coalition of nations that could combat the extremists through military power, diplomatic pressure and economic penalties.

“Those who want to adopt an isolationist approach misunderstand the nature of security in the 21st century,” they wrote in a joint editorial published as the meetings began. “Developments in other parts of the world, particularly in Iraq
and Syria, threaten our security at home.”

While some NATO leaders talked tough about the threat posed by the Islamic State group, the alliance made no specific pledges of action. NATO Secretary-General Anders Fogh Rasmussen said he believed the broader international community “has an obligation to stop the Islamic State from advancing further” and would seriously consider requests for assistance, particularly from the Iraqi government.

The Islamic State group moved up the list of international priorities as the group pressed through Iraq with lighting speed earlier this year. The group, which seeks to create a caliphate, or Islamist nation-state, in the Mideast, is considered even more merciless toward its enemies than the al-Qaida terror network, and intelligence officials across the world warn that, with hundreds of Westerners fighting for them, it may soon seek to seed its violence beyond its declared borders.

The U.S. began launching airstrikes against terrorist targets in Iraq last month, with Britain joining American forces in humanitarian airdrops to besieged minority populations. The terrorists’ killing of two American journalists inside Syria has raised discussion of targeting the group there as well.

White House officials said they did not expect NATO to commit to a military mission against the group during the summit. Still, they raised the prospect that the end of NATO’s combat mission in Afghanistan – an effort that has consumed the alliance for more than a decade — could allow member states to focus their attention elsewhere.

“What you see the alliance doing at this summit is looking at more than one direction at a time,” said Douglas Lute, the U.S. ambassador to NATO.

Indeed, the threat posed by the Islamic State overshadowed some of the NATO summit’s official agenda, which was intended to focus on celebrating the Afghan drawdown of troops and constructing a rapid response force on the alliance’s eastern flank that could serve as a deterrent to Russian aggression. Obama and European leaders met with Ukrainian President Petro Poroshenko in a show of solidarity with his embattled nation.

Beyond direct military action, the White House said it was also seeking commitments from allies to send weapons, ammunition and other assistance to Western-backed Syrian rebels and to Iraqi forces.

Germany moved in that direction Thursday, with the government announcing that it had sent a first planeload of military equipment to the Kurds in Iraq’s north, including helmets, protective vests, field glasses and mine-searching devices. The German government also said it had decided to send assault rifles, ammunition, antitank weapons and armored vehicles to the Kurdish forces, but it hadn’t yet set a date for the arms deliveries.

In between summit sessions on Afghanistan and Ukraine, Obama and Cameron also sought support from non-NATO nations that partner with the alliance. The president and prime minister held separate meetings with Jordan’s King Abdullah II Thursday, and both plan to meet Friday with Turkish President Recep Tayyip Erdogan.

Obama has said repeatedly that efforts against the Islamic State would be successful only if the U.S. had support from neighbors of Iraq and Syria.

Secretary of State John Kerry and Defense Secretary Chuck Hagel, who are both with Obama in Wales, plan to travel to the Middle East next week to rally more support from regional partners.

The U.S. and Britain have been particularly concerned about the prospect that Westerners who have traveled to Syria to join the terrorists could return to their home countries and launch attacks. Cameron proposed new laws this week that would give police the power to seize the passports of Britons suspected of fighting alongside the extremists.

A British citizen is believed to have carried out the beheadings of the American journalists James Foley and Steven Sotloff.