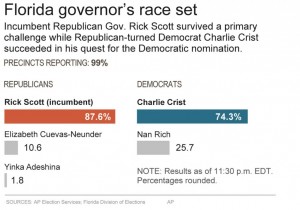 Florida voters handed Charlie Crist his first victory as a Democrat in Tuesday’s primary election for governor, while also exposing weaknesses in his nationally watched bid to take back the job he once held as a Republican.

Crist won almost 75 percent of Democratic votes in a widely expected defeat of a primary challenger. But voter turnout, a dismal 17.6 percent statewide, highlighted his vulnerabilities in key regions.

Some of the lowest levels afflicted the Democratic base in south Florida. Republican enthusiasm outpaced the Democratic showing in the critical swing region in the central part of the state, said Susan MacManus, a political science professor at the University of South Florida in Tampa.

“The No. 1 challenge facing Democrats right now is that they have to work hard to inject enthusiasm into their base,” she said, noting that Democrats struggle with low turnout during midterm elections.

With Republican Governor Rick Scott and Crist virtually tied in the polls ahead of November’s general election, the race is becoming one of the most expensive contests nationally. Blistering ad wars have begun.

Democrats last won a governor’s race in Florida two decades ago. Their path to victory requires racking up vote counts in Democratic-rich Miami-Dade, Broward and Palm Beach counties — all of which saw below-average turnout in Tuesday’s primary.

Democrats stressed that the primaries lacked a tight top-of-the-ticket contest to excite voters and get them to the polls.

“The Republicans didn’t have much reason to turn out, and the Democrats had no hard election,” said U.S. Representative Joe Garcia, a Miami Democrat in a tough re-election battle.

While Scott sailed to victory with more than 87 percent of the Republican primary vote over two virtually unknown challengers, some saw weaknesses in his margins, too.

“The most surprising thing was how many Republicans voted against Scott,” said Paula Dockery, a former state lawmaker and moderate Republican who is now a syndicated columnist.

This article appeared in print on page 2 of the August 28th, 2014 edition of Hamodia.