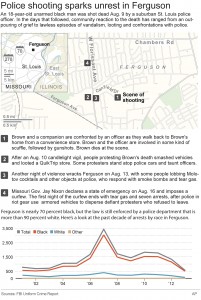 Funeral services are planned on Monday for an unarmed black teenager whose fatal shooting by a white policeman in Missouri has ignited more than a week of racially charged clashes in the St. Louis suburb of Ferguson.

As lawyers for the family of Michael Brown, 18, announced plans on Tuesday for his funeral, U.S. lawmakers called for calm and a change in police tactics that have so far failed to soothe angry demonstrators.

Police said they came under gunfire again overnight and made dozens of arrests, despite the deployment of Missouri National Guard troops and the lifting of a curfew to allow protesters more freedom to demonstrate.

There were at least 57 arrests on Monday night and into Tuesday, most on a charge of failure to disperse, according to the St. Louis County Justice Services Center. It said 15 of those arrested were from outside Missouri.

“The people who are rioting and looting are not the people who live in this area. They come down here and they wait for the action to start,” said Arlando Travis, 38, owner of a local landscaping business.

President Barack Obama said on Monday he told Missouri Governor Jay Nixon that use of the National Guard should be limited, and he also called for conciliation. Attorney General Eric Holder plans to visit Ferguson on Wednesday.

Ferguson, a mostly black community of about 21,000 residents just outside St. Louis, has a history of racial tension. Blacks have long complained of police harassment and under-representation in city leadership.

In a separate incident just miles from the protests, a 23-year-old black man holding a knife was fatally shot by police on Tuesday, police told a news conference. They said two officers opened fire after the man ignored repeated calls to drop his weapon.

Public reaction to the police response in Ferguson was mixed nationally, showing divisions along color and political lines, according to a Reuters/IPSOS poll released on Tuesday.

The online poll of 976 U.S. adults conducted from Friday to Monday showed a clear majority agreed the racial makeup of a police force should reflect the local community, and 78 percent said citizens should be able to record police making arrests and carrying out other duties.

Tensions boiled over 10 days ago after Brown was shot and killed while walking with a friend down a residential street on the afternoon of Aug. 9.

The police refused to immediately release the name of the officer who killed Brown. They later identified him as 28-year-old Darren Wilson, but have not provided details about why he fired multiple rounds at Brown.

Wilson has yet to make a public statement, but investigators said he has been cooperative in interviews with detectives.

The Department of Justice and the St. Louis County Police Department are both investigating the shooting. The county prosecutor’s office said it could start presenting evidence to a grand jury on Wednesday to determine if Wilson will be indicted.

Since the killing, thousands of protesters have taken over the site of the shooting and the nearby business district each night, chanting anti-police slogans and carrying signs calling for Wilson’s arrest.

Some journalists covering the confrontations have been hit by tear gas and arrested.

On Tuesday, the Vienna-based Organization for Security and Co-operation in Europe, an intergovernmental security and human rights organization whose members include 57 countries including the United States and Canada, criticized the treatment of the journalists.

On Monday night, some in the crowd hurled bottles, rocks and petrol bombs at officers, who responded by firing tear-gas-filled canisters and a noise cannon to try to disperse the throng.

State Highway Patrol Captain Ron Johnson, who was named to oversee security in Ferguson last week after the tactics of local police leadership were questioned, said officers had come under “heavy gunfire” but did not return it. Riot police confiscated two guns and what looked like a petrol bomb from protesters.

Four officers were injured, he said.

Johnson separately told CNN that two people were shot within the crowd, but not by police, and were taken to the hospital. There was no immediate word on their condition.

“This has to stop,” said Johnson, an African-American who grew up in the area. “I don’t want anybody to get hurt.”

Area schools remained closed on Tuesday due to the unrest.

The disturbances are the worst since the angry but peaceful protests across the United States in July 2013 over the acquittal of George Zimmerman, a white Hispanic who killed unarmed black teenager Trayvon Martin during a scuffle in Florida.