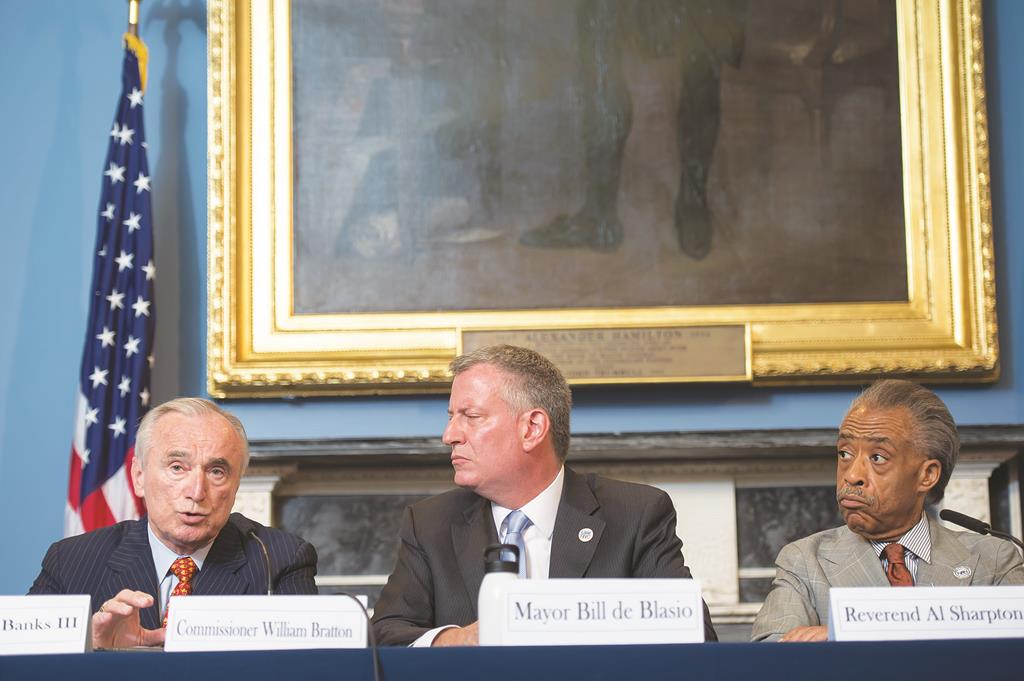 In a scene not witnessed at City Hall for decades, the mayor sat between his police commissioner and one of the police department’s most outspoken critics on Thursday, trying to ease tensions with minority communities after the in-custody death of a black man who was put in an apparent chokehold.

It was a fitting image for Democratic Mayor Bill de Blasio, caught between a campaign pledge to empower minorities who felt unfairly targeted by police and a promise to maintain the city’s recent historic drop in crime.

The case of Eric Garner has created a potential political powder keg. Garner, who was asthmatic, was being arrested on suspicion of selling loose cigarettes and died soon after being placed in the apparent chokehold by a white police officer.

Al Sharpton, an ally of the mayor, criticized Police Commissioner William Bratton for suggesting race wasn’t a factor in Garner’s July 17 death, which was recorded in an amateur video. And Sharpton provocatively invoked de Blasio’s teenage son, whose mother is black.

“If Dante wasn’t your son, he’d be a candidate for a chokehold. And we’ve got to deal with that reality,” Sharpton thundered during a two-hour panel of community leaders and city officials gathered by de Blasio to discuss Garner’s death.

Bratton, a proponent of the Broken Windows theory — that cracking down on low-level offenses helps suppress bigger ones — said again that chokeholds were against police policy and that he was enhancing training for 20,000 officers. De Blasio supported Bratton, calling him “the finest police leader in the United States of America,” and urged continued dialogue.

Two police officers involved in Garner’s death have been reassigned. Sharpton urged Bratton to “perp-walk” officers who use illegal chokeholds and repeated his call for the federal government to handle the case.

De Blasio didn’t address the possibility of a federal prosecution, but his administration is nervously watching a pair of upcoming milestones in the Garner case.

More tests are needed to determine the cause of Garner’s death, the city medical examiner’s office said. Those results could come soon and could determine what charges, if any, the officers could face.

Also, the Staten Island district attorney will determine whether to empanel a grand jury and charge officers in the death of Garner, who lived in the borough. The case is fraught with political consequences for District Attorney Daniel Donovan, a Republican whose office has a strong working relationship with the NYPD and whose constituents are overwhelmingly white and include many officers and their relatives.