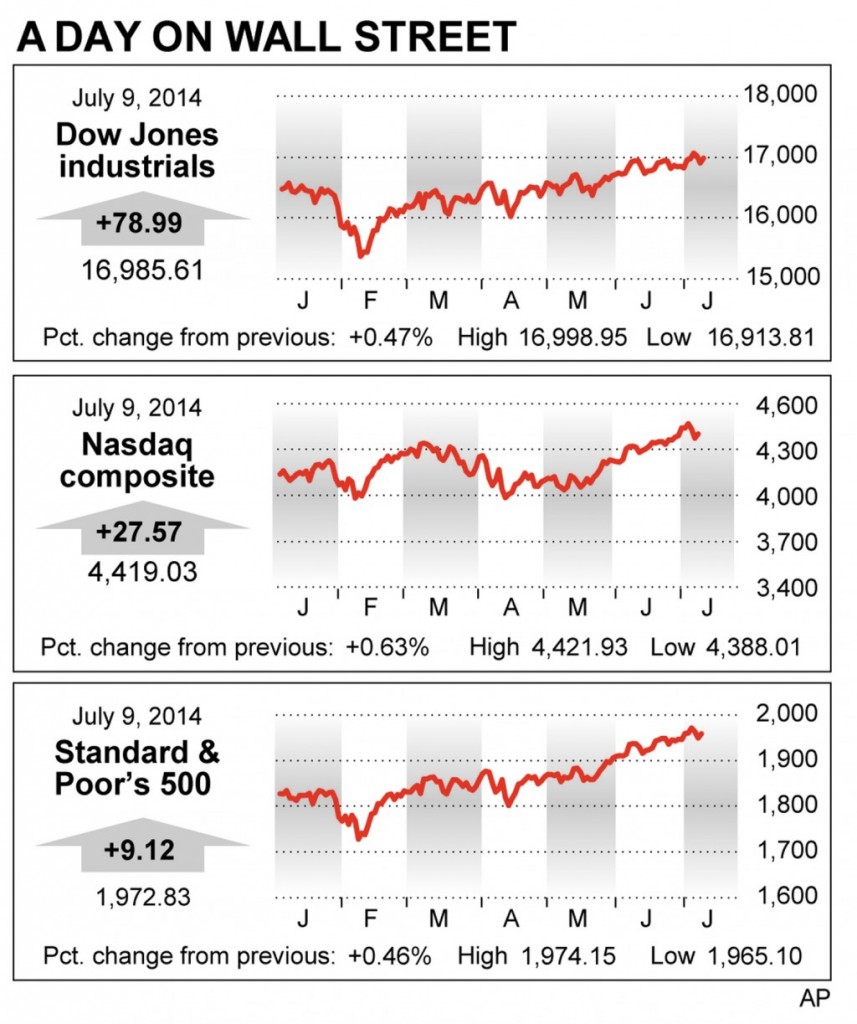 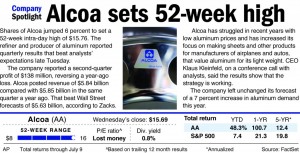 Corporate earnings season got off to a positive start Wednesday, helping lift the stock market after two days of declines.

The market opened higher and remained modestly higher throughout the day. Stocks climbed further after the Federal Reserve released minutes from its latest policy meeting in June.

The biggest gainer in the Standard & Poor’s 500 index was Alcoa. The aluminum giant’s earnings, which investors consider to be the official start of the quarterly corporate earnings season, came in well above Wall Street’s expectations. Alcoa earned $138 million, or 18 cents a share, compared with analysts’ estimates of 12 cents a share, according to FactSet. Alcoa rose 84 cents, or 6 percent, to $15.69.

As companies begin reporting their second-quarter results, investors will be looking for signs that the strengthening U.S. economy has translated into higher sales and profits. Analysts expect earnings increased 6.6 percent in the three months through June compared with the previous year, according to S&P Capital IQ, a research firm.

Investors argue that with stocks trading near all-time highs, it’s now up to companies to show whether or not these record high prices can be justified.

“Stocks are not cheap, and we need to be assured that these companies’ growth is going to continue,” said Quincy Krosby, market strategist with Prudential Financial.

The next big name to report will be the major U.S. bank Wells Fargo, which reports Friday. The bank is one of the country’s biggest mortgage lenders, and investors will be looking for Wells’ outlook on the housing market.

“I’m looking for a good, but not a great, earnings season,” said Michael Fredericks, portfolio manager of the Multi-Asset Income Fund at BlackRock. “We really need to see the guidance from companies, if management teams are as upbeat as the market.”

The market kept up its positive momentum following the latest report from the Federal Reserve.

Policymakers at the Fed have come up with a rough timetable for when the central bank’s bond-buying program will wind down, according to minutes from the bank’s most recent meeting. They generally agreed that the program will end in October, if the economy continues to improve at this pace, with a $15 billion reduction in monthly bond purchases.

The Fed is currently buying $45 billion a month in bonds and has been cutting back by $10 billion a month at each meeting since December. The program is designed to keep interest rates low to stimulate borrowing and economic activity.

The bond market turned higher after the Fed’s announcement. The yield on the 10-year U.S. Treasury note fell to 2.55 percent from 2.56 percent Tuesday, a reversal from earlier in the day, when yields were 2.58 percent. Bond yields fall when prices rise.