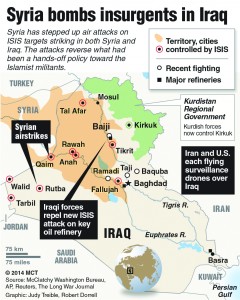 Syrian warplanes bombed Sunni terrorists’ positions inside Iraq, military officials confirmed Wednesday, deepening the concerns that the terrorist insurgency that spans the two neighboring countries could morph into an even wider regional conflict. U.S. Secretary of State John Kerry warned against the threat and said other nations should stay out.

Meanwhile, a new terrorist artillery offensive against Christian villages in the north of Iraq sent thousands of Christians fleeing from their homes, seeking sanctuary in Kurdish-controlled territory, Associated Press reporters who witnessed the scene said.

The United States government and a senior Iraqi military official confirmed that Syrian warplanes bombed terrorists’ positions Tuesday in and near the border crossing in the town of Qaim. Iraq’s other neighbors — Jordan, Kuwait, Saudi Arabia and Turkey — were all bolstering flights just inside their airspace to monitor the situation, said the Iraqi official, who spoke on condition of anonymity because he was not authorized to speak to the media.

American officials said the target was the Islamic State of Iraq and the Levant, the Sunni terrorist group that has seized large swathes of Iraq and seeks to carve out a purist Islamic enclave across both sides of the Syria-Iraq border.

“We’ve made it clear to everyone in the region that we don’t need anything to take place that might exacerbate the sectarian divisions that are already at a heightened level of tension,” Kerry said, speaking in Brussels at a meeting of diplomats from NATO nations. “It’s already important that nothing take place that contributes to the extremism or could act as a flash point with respect to the sectarian divide.”

Meanwhile, Iran has been flying surveillance drones in Iraq, according to U.S. officials who spoke on condition anonymity because they weren’t authorized to discuss the issue publicly. The intelligence-gathering is in addition to the presence in Baghdad this month of one of Iran’s most powerful generals, Gen. Qassem Soleimani, commander of the Revolutionary Guard’s Quds Force, who was there to help Iraqis bolster their defenses and consult with leaders of Shiite militias that he has armed and trained.

The involvement of Syria and Iran in Iraq suggests a growing cooperation among the three Shiite-led governments in response to the raging Sunni terrorist insurgency. And in an unusual twist, the U.S., Iran and Syria now find themselves with an overlapping interest in stabilizing Iraq’s government.

In a reflection of how intertwined the Syria and Iraq conflicts have become, thousands of Shiite Iraqi militiamen helping President Bashar Assad crush the Sunni-led uprising against him are returning home, putting a strain on the overstretched Syrian military as it struggles to retain territory recaptured in recent months from rebels.

Qaim, where the Syrian airstrikes took place Tuesday, is located in vast and mostly Sunni Anbar province. Its provincial government spokesman, Dhari al-Rishawi, told The Associated Press that 17 people were killed in an air raid there.

The White House said intervention by Syria was not the way to stem the terrorists, who have virtually erased Iraq’s western border with Syria and captured territory on the frontier with Jordan.

Reports that the Sunni terrorists have captured advanced weapons, tanks and Humvees from the Iraqi military that have made their way into Syria, and that fighters are crossing freely from one side to the other have alarmed the Syrian government. The advanced weaponry has the potential to shift the balance of power in the largely stalemated fight between Assad’s forces and the Sunni rebels fighting to topple him.

This article appeared in print on page 3 of the June 26th, 2014 edition of Hamodia.