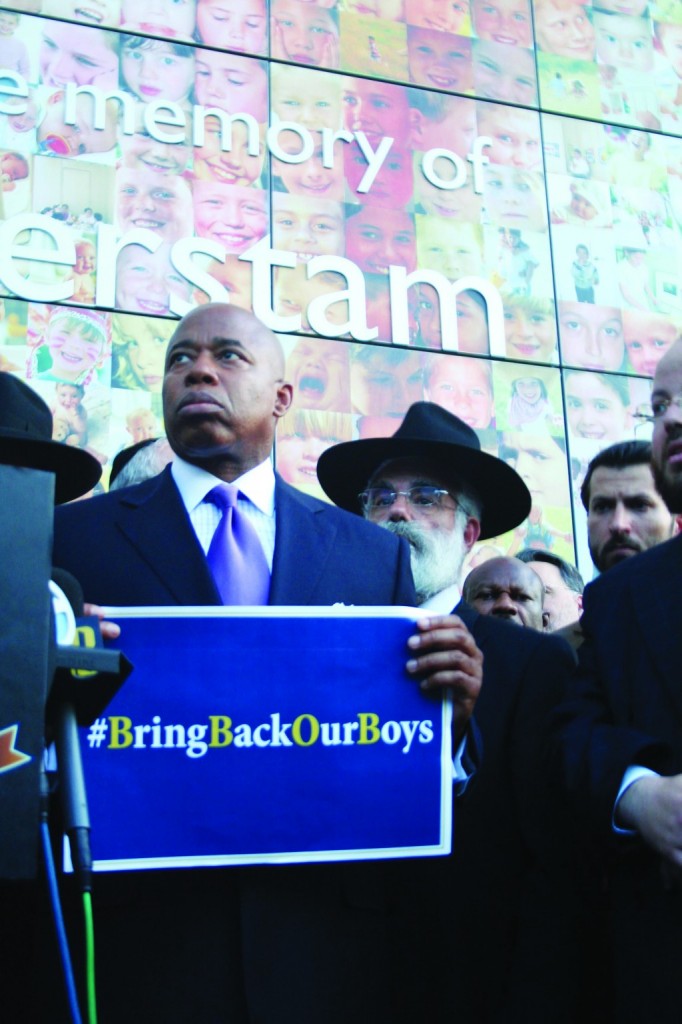 Emotions were high Tuesday as more than 100 people gathered outside the Jewish Children’s Museum in Crown Heights for a news conference protesting the abduction of three Israeli teenagers who were kidnapped last Thursday night.

Borough President Eric Adams, holding a sign, “Bring Back Our Boys,” was emotional throughout the meeting and told Hamodia, “the United States government should do everything in its manpower to bring back the children to safety.”

Mr. Adams told the crowd that the signs tell it all.

“Bring our boys home,” he said. “I think no parent would want to endure this nightmare of having their children on the way home from school, receiving a phone call that their child has been harmed or kidnapped or that their child is not coming home. We want to add our voice to all those across the globe. All those people with dignity and decency are saying the same thing: ‘Bring our boys home!’ These children should come home unscathed and untouched. They are not a part of politics, they are a part of being children. Innocent children that are being used to hurt and harm other people.”

Adams told the crowd that he chose Crown Heights to hold his vigil, since “it’s a symbol of all the unity in this community.”

For the African American community, it has been a tough time with 200 children in Nigeria kidnapped. It was a point iterated by Public Advocate Letitia James.

Devorah Halberstam, director of the Museum, stood under an inscription on the wall commemorating her son Ari, Hy”d, who was murdered by a Muslim terrorist on the Brooklyn Bridge in 1994.

“Before the memory of my son, this gathering today does not represent just this community, it represents the children of the world,” Halberstam said. “Kids need to be enjoying the things that kids do in this museum every day, playing.”

After the vigil Halberstam told Hamodia, “I know what these mothers are going through. I want to let them know, we are with you, keep your faith. We are all praying for your kids return safely and we will continue to do so until that happens.”