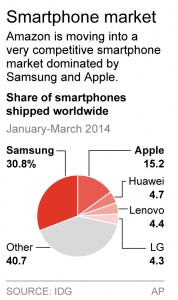 Amazon has introduced a new smartphone with audio- and object-recognition technology that seeks to make it easier for consumers to locate and purchase products and services from the nation’s largest e-commerce company.

The new Fire phone also adds such features as the ability to render images in 3-D.

The Fire phone doesn’t differ much with other smartphones on the market and shares many characteristics found in other Amazon devices.

Amazon’s new Firefly feature allows users to take a photo of an object, such as a toaster or a soup can, and get more information about it, including a way to purchase it through Amazon.

Many of the new features have been available elsewhere as separate apps. Sony, for instance, has a tool for getting information by snapping a bar code or a landmark. Firefly goes further, though, by incorporating audio recognition.

“It goes back to the mission of Amazon, which is to sell you stuff,” said Ramon Llamas of the research firm IDC. “It reduces the number of steps it takes to buy things on the phone.”

The phone will have a screen measuring 4.7 inches diagonally. That’s smaller than the leading Android phone, but larger than Apple’s iPhone. CEO Jeff Bezos calls the Fire’s size ideal for one-handed use.

The phone will be available July 25 in the U.S., exclusively through AT&T. People can start ordering it Wednesday. Prices are comparable to other leading high-end phones, but the Fire will have double the storage. It will cost $200 for a base model with 32 gigabytes, and $300 for 64 gigabytes. Both require two-year service contracts. Without contracts, they will cost $650 and $750.

The phone will come with 12 months of Prime membership, which is normally $99 a year. Existing Prime members will get their term extended.

Competing won’t be easy, though, particularly because Fire’s prices aren’t lower, Llamas said. With tablets, Amazon has been able to beat Apple and its iPads on price. Amazon makes up for that by selling more content.

Amazon is also arriving late to a tightly contested marketplace. Samsung and Apple dominate worldwide smartphone sales with a combined 46 percent share, according to IDC. And in the U.S., Apple leads with more than 37 percent, with Samsung at nearly 29 percent.

This article appeared in print in the June 19th, 2014 edition of Hamodia.