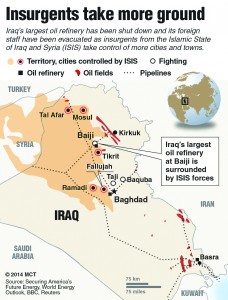 Forces loyal to the Iraqi government repulsed an insurgent attack on a provincial town northeast of Baghdad, state media reported Tuesday, as Iraqi troops bolstered defenses around the capital.

The central government headed by Prime Minister Nouri al-Maliki has been mobilizing troops and volunteers to counter a challenge from Sunni Muslim terrorists of the Islamic State of Iraq and Syria, who have made sweeping territorial gains in northern and central Iraq.

The sectarian-fueled clashes have raised fears in Washington and elsewhere that Iraq could descend into a civil war like the conflict that has been raging for more than three years in neighboring Syria.

On Monday, state media said, armed gunmen launched an attack on strategically situated Baqoubah, the capital of Diyala province, about 35 miles northeast of Baghdad. But officials said the Iraqi army, bolstered by pro-government militiamen, beat back the assault on the city, which was a bloody battleground during the U.S. occupation of Iraq.

Opposition activists, however, said rebel fighters had seized control of several neighborhoods in Baqoubah, releasing all detainees from a police station and attacking an army battalion.

There were conflicting accounts about the reported deaths of prisoners at a jail in Baqoubah. Each side blamed the other for the deaths of almost four dozen Sunni detainees at the jail, the Associated Press reported, but neither account could be independently verified.

The Diyala police chief, Maj. Gen. Jamil Shamri, told local media that the clashes near a police station resulted in the deaths of nine insurgents and one pro-government fighter, and that police had “returned to the station and it is now totally under their control.”

Clashes also continued in Tal Afar, an ethnically diverse town 260 miles northwest of Baghdad in Nineveh province, a day after government officials and armed groups made conflicting assertions of control of the area.

The militants last week seized a number of cities and towns, including Mosul, one of Iraq’s largest cities, and Tikrit, the hometown of the late dictator Saddam Hussein.

Facing a severe threat, Iraqi authorities have been ratcheting up their response. Pro-government activists reported the establishment of an aerial supply bridge to ferry soldiers and weapons to loyalist forces. Their ranks include army and police units and members of various Shiite militias that have been mobilizing in recent days.

The Iraqi government is scrambling to halt the advance of battle-hardened Sunni fighters who have achieved a string of dazzling military successes against better equipped and numerically superior Iraqi army and police units. Many gained experience fighting in Syria against the government of President Bashar Assad.

The takeover of Mosul saw Iraqi army and police units abandon their posts and equipment with little resistance. That stunning development led to a string of similar capitulations across wide swaths of Sunni-dominated areas of Iraq, as many Sunni residents welcomed the Islamist fighters as “liberators” and “revolutionaries.”

Al-Maliki, stunned by what he termed “a black conspiracy” that will be “dyed by the blood of the traitors,” launched a call for the formation of local militias, enlisting the help of prominent clergymen, including Grand Ayatollah Ali al-Sistani, Iraq’s preeminent Shiite cleric. Tens of thousands of young Shiite men have made their way to recruitment centers as the specter of a sectarian bloodbath threatens to tear the country apart.

The U.S.-led 2003 invasion of Iraq ousted Saddam, a Sunni Muslim widely despised by many in the nation’s Shiite majority. The Shiite-led government that took power following Saddam’s fall in turn fostered deep resentments among the nation’s Sunni minority, who complained of being marginalized after dominating Iraqi politics for decades.

The United States and its allies have urged the Shiite-led Iraqi government to reach out to Sunnis. But recent violent events have dramatized how far the nation is from reconciliation.

“There is a real risk of further sectarian violence on a massive scale, within Iraq and beyond its borders,” U.N. Secretary-General Ban Ki-moon said Tuesday. “I have been urging Iraqi government leaders including Prime Minister Nouri al-Maliki to reach out to Sunnis to rebuild national unity as the only way of preventing the disintegration of Iraq.”

This article appeared in print on page 11 of the June 18th, 2014 edition of Hamodia.