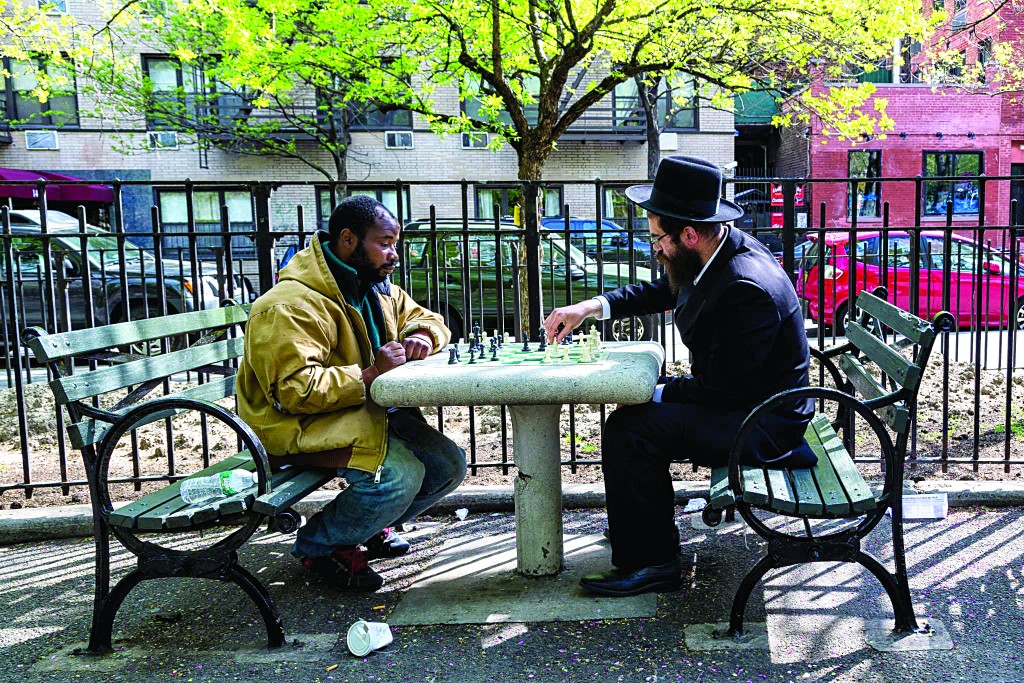 It was a typical picture of two men playing chess in a Manhattan park, an innocuous New York scene caught on camera by a roving street photographer who posted it online with the words “A Great NYC Moment.”

The picture went viral — it was posted last week Wednesday and was subsequently shared hundreds of times.

The picture obviously captured people’s imaginations — two gentlemen who appeared to be around the same age seated on park benches across a chessboard table. One was a Jew dressed in traditional chassidic garments with a beard and thick peyos, his hand on a white bishop, deeply involved in deciding his next move; the other, a thinly-bearded African-American wearing jeans and a tan leather jacket, waiting patiently for his turn, a half empty water bottle lying at his side.

The background was the drab apartment buildings that dot the entire city; this one, the photographer, Mo Gelber, wrote, was at Union Square in Lower Manhattan. The circumstances for the chess game appeared intriguing but there was no way of ascertaining them.

Hamodia published the picture in Monday’s daily, a large image in the center of page 5, with the little accompanying information that was available. It was the sort of photo that comes along once a year or so, the spontaneous interaction of members of two communities that rarely mingle at the grassroots level.

As the photo burned up cybersphere, with some tagging it a “kiddush Hashem” image, the question arose: who is this man? And how did such an unlikely picture develop? Did the two men know each other?

The phone call to Hamodia’s office came early in the afternoon. The man in the photo was a recognized personality in Boro Park’s Jewish community, said the caller, who is a friend of this writer, with deep roots in the local media world. The subject of the photograph had no idea why there was so much interest in the picture, but had been convinced by friends that a major kiddush Hashem had come out of it.

Shortly afterward, I was on the phone with Dovid Bergman, a young man with an earnest demeanor, with a reputation for clarity and warmth that make him a sought-after maggid shiur.

From his nightly Daf Yomi shiur in Boro Park’s Radzyner Beis Medrash, along with his other shiurim in several shuls throughout Boro Park and Flatbush, an admirer who spoke to Hamodia on condition of anonymity estimates that Rabbi Bergman, 28, had delivered shiurim on the entire Shas already.

“This is the story the way it happened,” began Rabbi Bergman, an Amshinover chassid who grew up in Seagate. He had gone to Queens to check out a yeshivah for a job he was offered there. On the train ride home, he had to transfer to the N train at the Union Square stop.

“After three quarters of an hour sitting on the hot train,” he says, “I had to get off to air out.”

Passing a nearby park, an African-American man was sitting at a chessboard table waving at Rabbi Bergman.

“Jew, you want to have a chess game?” he called.

Rabbi Bergman decided that he had five minutes — either he would win or his opponent would win during that allotted time.

It took less than five minutes for Rabbi Bergman to win the game.

But it was enough time for the passing Gelber, a street photographer who likes to capture local flavor in his imagery, to snap his picture of the week.

“I was in shul on Shabbos,” Rabbi Bergman tells Hamodia, “and someone asked me who won the chess game. It took me about 10 seconds to figure out what he was talking about. He then told me that it was going viral.”

One person posted that the photo “gives me solace in humanity.”

“It’s one of those ‘only in America’ moments,” agreed another. “Check-mates,” pronounced a third.

Gelber, the photographer, told Hamodia that those same sentiments inspired him to snap the picture.

“Unfortunately,” Gelber said, “there is still a lot of racism in this country, and when I see a scene like this it gives me hope that one day humanity will get it right and stop hating each other based on racial stereotypes.”

Rabbi Bergman admitted feeling very uncomfortable with his 15 minutes of fame — his initial reaction to Hamodia’s publishing the picture was to ask someone to call Hamodia and request not to reprint it in Wednesday’s weekly edition — but was convinced by his friends that it was a kiddush Hashem.

“Duvid,” said Mr. Meyer, who frequently interacts with city officials, “I have relationships with the authorities — you have no idea what you did. Ashrecha! The kiddush Hashem that you caused will help the community.”

Calls to friends reveal a deep reservoir of admiration for Rabbi Bergman, who they say is a confidant of Harav Avrohom Chaim Steinwurtzel, a Rav in Boro Park, and is very close with Harav Yitzchak Tuvia Weiss, Gaavad of the Eidah Chareidis in Yerushalayim.

One friend recalled the time he helped arrange a shiur for Rabbi Bergman. The Gaavad called him personally from Eretz Yisrael to urge the plan to succeed.

“He’s an amazing person, a big talmid chacham,” the friend gushed. “He is a big baal kisharon, he has a tremendous influence on young bachurim, he is someone whom people listen to.”

So what was the friend’s reaction when he saw the chess game seen round the world?

“I was laughing. I saw it, it was amazing. It is very interesting that out of everyone you would find him in a picture like that.”