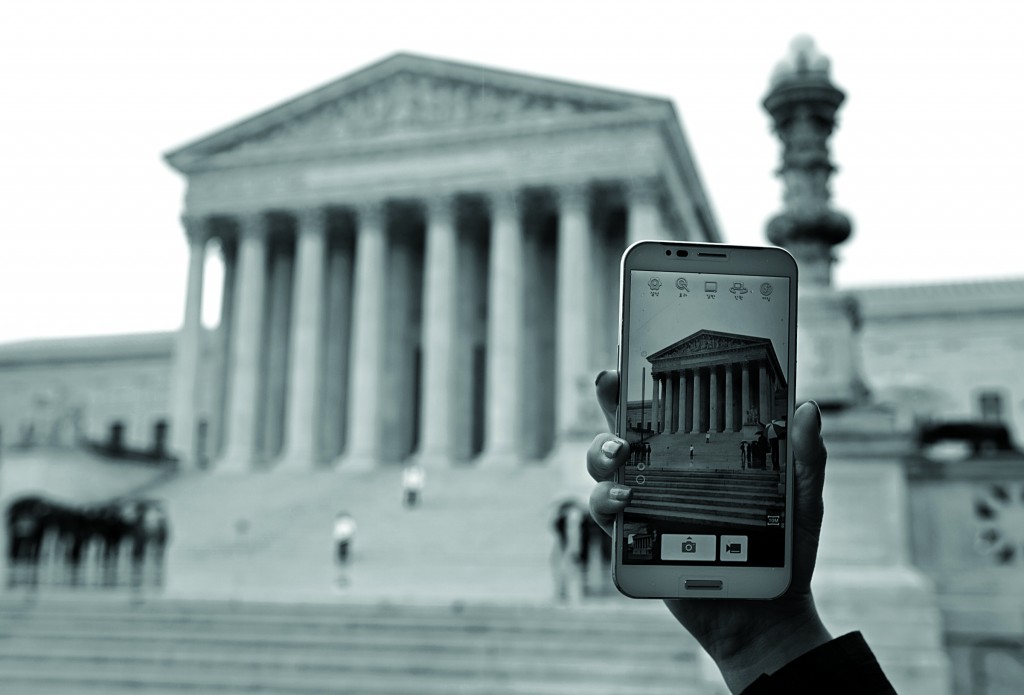 The Supreme Court seemed wary Tuesday of allowing police unbridled freedom to search through cellphones of people they arrest, taking on a new issue of privacy in the face of rapidly changing technology.

The justices appeared ready to reject the Obama administration’s argument that police should be able to make such searches without first getting warrants.

A key question in two cases argued Tuesday is whether Americans’ cellphones, with vast quantities of sensitive records, photographs and communications, are a private realm much like their homes.

The issue involving devices now carried by almost everyone is the latest in which the court is being asked to adapt old legal rules to 21st-century technological advances. “We are living in a new world,” Justice Anthony Kennedy said.

The court heard arguments in cases involving a drug dealer and a gang member whose convictions turned in part on evidence found on their cellphones.

The justices suggested they might favor limiting warrantless cellphone searches to looking for evidence of the crime on which an arrest is based. Both defendants could lose in such an outcome.

More broadly, however, a decision imposing restrictions on the searches could avoid subjecting people arrested for minor crimes to having all the contents of their cellphones open to police inspection. And it might also prevent the police from using the phones to connect to the internet and any information stored online.

If police were to arrest someone for driving without a seat belt, Justice Antonin Scalia said, “it seems absurd that they should be able to search that person’s iPhone.”

The Supreme Court has previously ruled that police can empty a suspect’s pockets and examine whatever they find to ensure officers’ safety and prevent the destruction of evidence. The Obama administration and the state of California, defending the searches, said cellphones should have no greater protection from a search than anything else police find.

But the defendants in these cases, backed by an array of civil libertarians, librarians and news media groups, argued that cellphones, especially smartphones, are increasingly powerful computers that can store troves of sensitive personal information.

“I think you will fundamentally have changed the nature of privacy that Americans fought for at the founding of the republic and that we’ve enjoyed ever since,” Fisher said.

The issue is of more than passing concern for many. More than 90 percent of Americans own at least one cellphone, the Pew Research Center says, and the majority of those are smartphones. More than 12 million people were arrested in the U.S. in 2012, according to FBI statistics.

Under the Constitution’s Fourth Amendment, police generally need a warrant before they can conduct a search. The warrant itself must be based on “probable cause,” evidence that a crime has been committed. But in the early 1970s, the Supreme Court carved out exceptions for officers dealing with people they have arrested.

“How do we determine what the new expectation of privacy is?” Justice Samuel Alito asked.

Justice Department lawyer Michael Dreeben repeatedly warned the court about unduly restricting officers when they seize a phone, saying they might need to act quickly to evade encryption that could render the device impregnable. If officers are forced to get a warrant and the phone’s protection is activated, Dreeben said, “It may be months or years or never before officers can break through that encryption.”

He also argued that cellphones are important devices in the commission of crimes, a point picked up by Kennedy. People who are breaking the law are “more dangerous, more sophisticated, more elusive with cellphones,” Kennedy said.

By contrast, Fisher urged the court to regard cellphones generally as extensions of the home, where privacy protections are greatest.

Prosecutors used video and photographs found on Riley’s smartphone to persuade a jury to convict him of attempted murder and other charges. Officers who arrested Wurie on suspicion of selling drugs checked the call log on his flip phone and used that information to determine where he lived. When they searched Wurie’s home, armed with a warrant, they found drugs, a gun and ammunition.