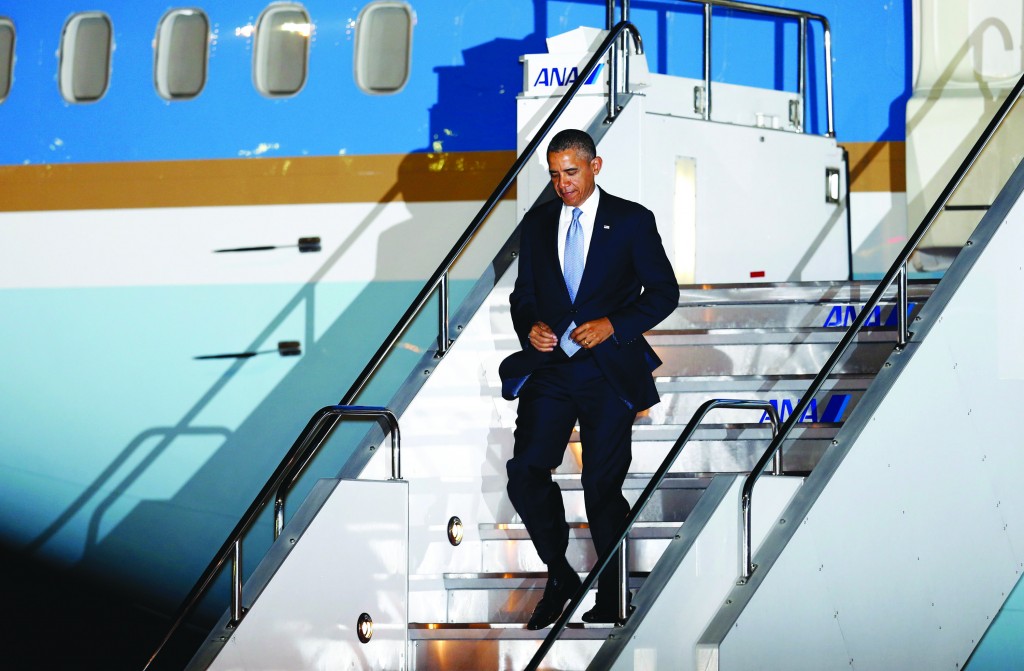 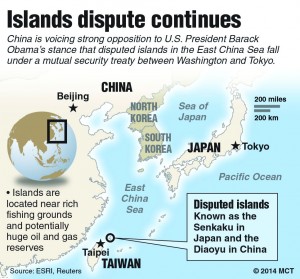 Facing fresh questions about his commitment to Asia, President Barack Obama will seek to convince Japan’s leaders Thursday that he can deliver on his security and economic pledges, even as the crisis in Ukraine demands U.S. attention and resources elsewhere.

The ominous standoff between Ukraine and Russia is threatening to overshadow Obama’s four-country Asia swing that began Wednesday. He may decide during the trip whether to levy new economic sanctions on Moscow, a step that would signal the failure of an international agreement aimed at defusing the crisis.

But at least publicly, Obama will try to keep the focus on his Asia agenda, which includes reaffirming his commitment to a defense treaty with Japan, making progress on a stalled trans-Pacific trade agreement and finalizing a deal to modestly increase the American military footprint in the Philippines.

Prime Minister Shinzo Abe said he and Obama had a long talk at a private dinner Wednesday evening and looked forward to a fruitful meeting Thursday “so that we can jointly send a message to the rest of the world that the Japan-U.S. alliance is unshakeable and strong.”

Obama opened the first state visit by an American president to Japan in nearly 20 years with the dinner at Tokyo’s famed sushi restaurant Sukiyabashi Jiro. The restaurant is run by 88-year-old Jiro Ono, whose meticulous technique was detailed in the 2011 documentary “Jiro Dreams of Sushi.”

Abe told reporters Obama praised the meal as “the best sushi he had had in his life.”

On Thursday, Obama will meet with Japanese Emperor Akihito, have a news conference with Abe and attend a banquet at the Imperial Palace. He also plans to visit the Meiji Shrine, which honors the emperor whose reign saw Japan emerge from over two centuries of isolation to become a world power.

Obama’s stops in Japan, South Korea, Malaysia and the Philippines serve as something of a do-over after he canceled a visit to Asia last fall because of the U.S. government shutdown. The cancellation provided fresh fodder for those in the region who worry that the White House’s much-hyped pivot to Asia is continually taking a backseat to other foreign and domestic priorities.

“I think the president will want to make clear that this commitment will be unaffected by developments in Ukraine and other global events,” said Jeffrey Bader, Obama’s former Asia director. “Countries want to hear that the U.S. presence is in fact steady and strong as China rises.”

While China is not on Obama’s eight-day itinerary, leaders in Beijing will be closely watching the president’s tour. Obama’s advisers insist the trip — and the White House’s broader Asia policy — is not designed counter to China’s growing power, and they say the president is not asking Asian nations to choose between allegiance to Washington or Beijing.

Still, Obama faces a particularly tricky balance in Tokyo, which is locked in a tense territorial dispute with China over islands Japan oversees in the East China Sea. The U.S. has a defense treaty requiring it to come to Japan’s defense if it is attacked, and Obama is expected to reaffirm his commitment to that agreement. Ahead of his arrival, he told a Japanese newspaper that the treaty does apply to the island disputes and he opposes “unilateral attempts to undermine Japan’s administration of these islands.”

“Disputes need to be resolved through dialogue and diplomacy, not intimidation and coercion,” Obama said in a written response to questions from Japan’s Yomiuri newspaper.

A Chinese government spokesman responded that China has “indisputable sovereignty” over the islands and that “the so-called Japan-U.S. alliance” should not harm China’s territorial rights.

On the economic front, Obama is unlikely to have much new to show for efforts to deepen trade ties with Asia. Negotiations on the Trans-Pacific Partnership, a twelve-nation free trade pact, are stalled, particularly discussions between the U.S. and Japan over tariffs on agriculture and automobiles.

And Obama’s effort to fast-track passage of the eventual agreement back home is being blocked by congressional Democrats, creating a political dilemma for the White House in a midterm election year.

“It is a bit odd for the president to push for TPP in Japan when he has not gotten fast-track negotiating authority from Congress,” says Rep. Rosa DeLauro (D-Conn.), an opponent of the trade pact.

The trade agreement’s opponents argue that it would send U.S. jobs overseas to countries with cheaper labor costs. Supporters contend the deal would expand export markets for American companies in one of the world’s fastest growing regions, while also serving as a counter to China’s rising economic power.