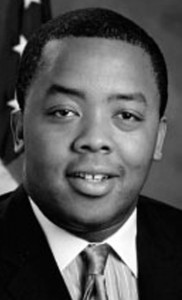 An assemblyman from a storied family of Brooklyn politicians was convicted Thursday of charges he was caught in a sting operation accepting bribes from a carnival promoter and two undercover FBI agents posing as out-of-town real estate investors.

A jury found William Boyland Jr. guilty on extortion and multiple conspiracy counts at a federal trial in Brooklyn. A judge revoked his bail and jailed him after the verdict was read, prosecutors said.

“The breadth and pervasiveness of the corruption exposed by this prosecution is staggering,” U.S. Attorney Loretta Lynch said in a statement. “Wherever there was an opportunity for William Boyland to corruptly line his own pockets, he took it.”

Boyland didn’t dispute that he drank and dined with the undercovers at hotels and steakhouses in Manhattan, Brooklyn and Atlantic City. But his lawyers said his only offense was making empty promises. He first came under scrutiny in 2010 when he accepted thousands of dollars in bribes to help a carnival promoter obtain permits. At the direction of the FBI, the promoter introduced Boyland to the undercover agents.

After one of the agents told Boyland not to “be bashful” in naming his price, the lawmaker said, “Two fifty.” In another video, Boyland could be seen taking the agents on a tour of his district and boasting, “I control all this.”

This article appeared in print on page 6 of the March 7th, 2014 edition of Hamodia.