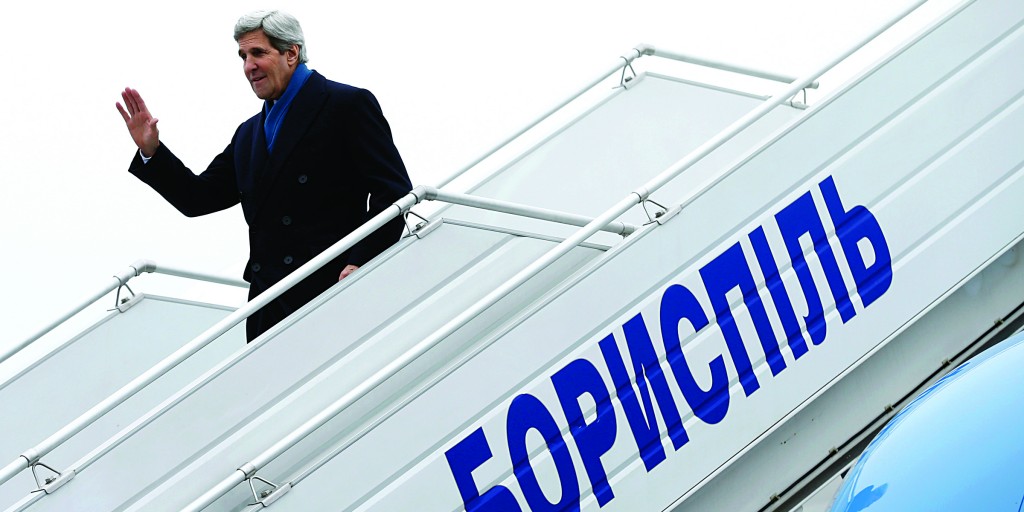 In a somber show of U.S. support for Ukraine’s new leadership, Secretary of State John Kerry walked the streets Tuesday where more than 80 anti-government protesters were killed last month, and promised beseeching crowds that American aid is on the way.

“It is clear that Russia has been working hard to create a pretext for being able to invade further,” Kerry said. “It is not appropriate to invade a country, and at the end of a barrel of a gun dictate what you are trying to achieve. That is not 21st-century, G-8, major nation behavior.”

Kerry made a pointed distinction between the Ukrainian government and Putin’s.

“The contrast really could not be clearer: determined Ukranians demonstrating strength through unity, and the Russian government out of excuses, hiding its hand behind falsehoods, intimidation and provocations. In the hearts of Ukranians and the eyes of the world, there is nothing strong about what Russia is doing.”

He said the penalties against Russia are “not something we are seeking to do, it is something Russia is pushing us to do.”

President Barack Obama, visiting a Washington, D.C., school to highlight his new budget, said his administration’s push to punish Putin put the U.S. on “the side of history that, I think, more and more people around the world deeply believe in, the principle that a sovereign people, an independent people, are able to make their own decisions about their own lives. And, you know, Mr. Putin can throw a lot of words out there, but the facts on the ground indicate that right now he is not abiding by that principle.”

The Obama administration announced a $1 billion energy subsidy package in Washington as Kerry was arriving in Kiev.

U.S. officials traveling with Kerry, speaking on condition of anonymity, said the Obama administration is considering slapping Russia with unspecified economic sanctions as soon as this week. Members of Congress say they’re preparing legislation that would impose sanctions as well.

As Kerry arrived, the White House announced the package of energy aid, along with training for financial and election institutions and anti-corruption efforts. Additionally, the officials said, the U.S. has suspended what was described as a narrow set of discussions with Russia over a bilateral trade investment treaty. It is also going to provide technical advice to the Ukraine government about its trade rights with Russia. The officials spoke on condition of anonymity because they were not authorized to be quoted by name before the official announcement was made.