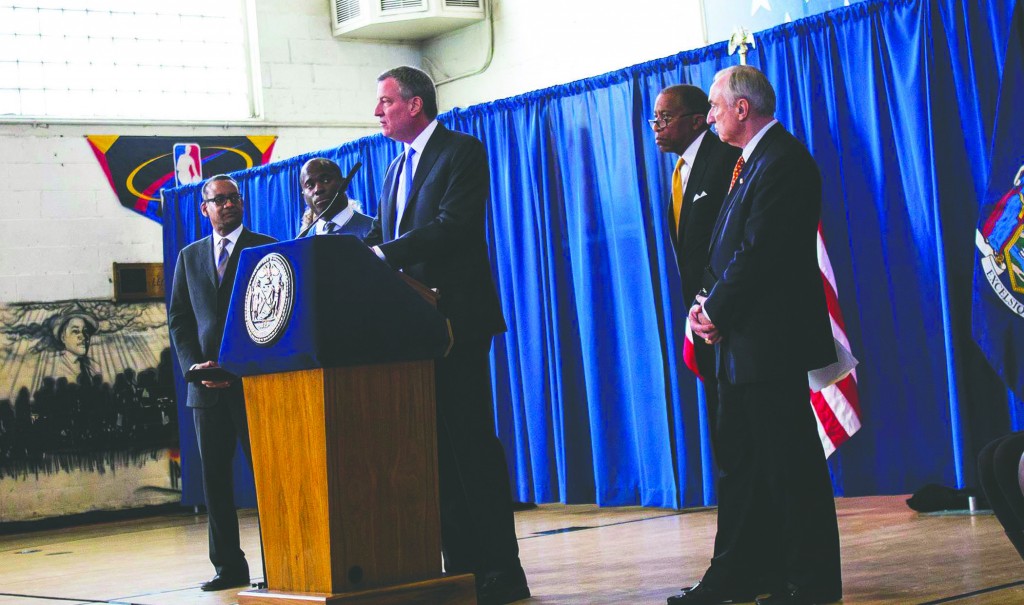 Declaring an end to a police program that has saved thousands of lives but minorities say targeted them, Mayor Bill de Blasio on Thursday delivered on his campaign promise to end the “abuse” of stop-question-and-frisk, agreeing to the appointment of a monitor and seeking to end a 14-year court fight.

“We believe these steps will make everyone safer,” de Blasio said at a news conference in Brownsville, which media reports said was the neighborhood where residents were stopped most in the city.

However, the 2nd Circuit Court of Appeals in an order Thursday allowed several police unions to pursue the appeal on their own. The unions, which represent more than 29,000 of the 35,000 members of the police department, have until Feb. 7 to challenge the city’s request to return the case to the lower court for resolution.

The unions had asked to step in if the city abandoned its appeals, saying in court papers that the rulings by Judge Shira Scheindlin were “fundamentally unsound” and would “rewrite the rules governing how they conduct themselves on a day-to-day basis.”

Patrolmen’s Benevolent Association President Patrick J. Lynch said in a release Thursday that his organization continues “to have serious concerns about how these remedies will impact our members and the ability to do their jobs. Our goal is to continue to be involved in the process in order to give voice to our members and to make every effort to ensure that their rights are protected.”

De Blasio and Police Commissioner William Bratton have said the policy has created a rift among New Yorkers who don’t trust police and made morale low for officers who should be praised for stellar efforts reducing crime to record lows.

The stop-and-frisk tactic itself was not ruled unconstitutional, but the way the department was using it violated civil rights, the judge said. In an unusual decision, the court of appeals removed Scheindlin from the case, saying that she gave the appearance of bias.

On Thursday, de Blasio said the city agreed to the appointment of a monitor for three years to oversee new policies aimed at ending discrimination. The monitor, which had been strenuously opposed by former Mayor Michael Bloomberg as crimping law enforcement, will oversee a process in which African-American and Latino communities will provide input on the reforms.

Vincent Warren, executive director of the Center for Constitutional Rights, which has represented plaintiffs in the lawsuits, welcomed the decision but said that the announcement did not mean the fight was over.

“Nobody standing here today is pretending this is mission accomplished. The problem hasn’t been solved,” he said. “We will have a collaborative reform process. We’ll have a court monitor to ensure these reforms move forward.”

Bratton said the policy as it had been carried out for years had left too many people who were frisked asking, “Why, why me?” while police officers being pressed to make ever more arrests even as crime rates fell dramatically were wondering, “Why more?”

He said the practice had torn the fabric between the police and the population. “We need to repair it,” he said.

Scheindlin ruled last year that the NYPD had discriminated against blacks and Hispanics when stopping, questioning and sometimes frisking people on the street. Bloomberg appealed the decision but de Blasio, who took office at the beginning of the year, had made settling the issue a major component of his campaign.

Bloomberg was a staunch advocate of the policy, regularly citing statistics that nearly 10,000 lives were saved since its implementation 12 years ago. While most of the more than 5 million stops in the past decade were black and Hispanic men, Bloomberg said, that was the profile of more than 90 percent of perpetrators or victims of crimes.

While de Blaiso has a frosty relationship with Bloomberg, he announced Thursday that he has joined Mayors Against Illegal Guns, which was co-founded by Bloomberg.

“Mayor Bloomberg took on this fight when few others would, and today we are safer for it,” de Blasio said in a statement.