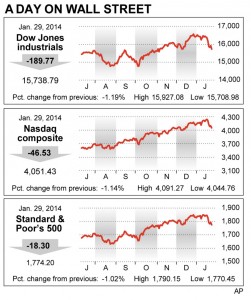 Stock investors had plenty to dislike on Wednesday.

Disappointing earnings from big U.S. companies, ongoing jitters in emerging markets and more cuts to the Federal Reserve’s economic stimulus combined to push stocks lower for the fourth day out of the last five.

Boeing slumped after the plane maker said its 2014 revenue and profit would fall short of analysts’ expectations as its defense business slows and it delivers more of its 787 planes, which are less profitable. AT&T, the largest U.S. telecommunications company, fell after its outlook for the year disappointed investors.

Currencies including the Turkish lira and the South African rand fell against the dollar despite efforts by central banks in those countries to stem the declines by raising interest rates. Investors say those tighter credit policies, which can restrict lending, come with risks.

Stocks opened lower in response to the lackluster earnings news. The market added to its declines after the Fed’s announcement at 2 p.m. Eastern time.

The Fed said it will lower its monthly bond purchases by $10 billion to $65 billion because of a strengthening U.S. economy. The Fed is cutting back its bond purchases, which have held down long-term interest rates, even though the prospect of reduced stimulus has rattled global markets. The move was largely anticipated by analysts and investors.

Investors should view the Fed’s move as a vote of confidence in the economy because it means the central bank sees the recovery as more entrenched, said Dan Genter, chief investment officer at RNC Genter Capital Management.

Fed policymakers are “not seeing enough bad news to stop that process, which should be viewed as a positive.”

The S&P 500 has dropped nearly 4 percent since concerns about developing the emerging market jitters first surfaced last Thursday. That’s when a survey showed that manufacturing in China, the world’s second-biggest economy, was slowing in January.

Stocks have extended their declines as emerging market currencies have been battered in recent days.

The Turkish lira has been at the center of an emerging-market sell-off that prompted jitters in global stock markets over the past week. The currency surged against the U.S. dollar late Tuesday after Turkey’s central bank raised its benchmark lending rate to fight rising inflation.

The lira traded at 2.26 to the U.S. dollar on Wednesday afternoon, slightly lower than it was before the central bank raised interest rates.

South Africa also raised its interest rates Wednesday but the move failed to shore up its currency. The South African rand dropped 3.2 percent against the dollar to 11.26 rand per dollar.

After a year of big gains, U.S. stock traders are now seeing red figures on their screens more often.

The S&P 500 index has fallen 4 percent this month, putting it on track for its biggest monthly decline since May 2012. That’s a big contrast from last year, when the index rose 5 percent in January. The index ended the year up nearly 30 percent, its best performance since 1997.

On Wednesday, Yahoo was the biggest decliner in the S&P 500.

The company dropped $3.33, or 8.7 percent, to $34.89 after it reported a drop in fourth-quarter revenue late Tuesday, highlighting its trouble drawing online advertising dollars. Yahoo reported a 6 percent decline in revenue, the same rate of decline for all of 2013.

After the market closed, investors got some encouraging earnings news from two technology companies. Facebook soared 10 percent in after-hours trading after its earnings and revenue surpassed analysts’ expectations. The company expanded the number of users and the amount of money it makes on mobile ads.

Qualcomm, which makes chips for cell phones, rose 3 percent in after-hours trading. Its earnings came in well ahead of what financial analysts were expecting.

Bond prices rose as investors looked for safer assets. The yield on the 10-year Treasury note fell to 2.69 percent from 2.75 percent. The yield on the note is the lowest it’s been since November. It climbed as high as 3 percent Jan. 3.

AT&T fell 39 cents, or 1.2 percent, to $33.31 after its outlook for the year disappointed investors. The phone company said its forecast “assumes no lift from the economy.” AT&T predicted earnings in the mid-single digit range.

Dow Chemical rose $1.67, or 3.9 percent, to $44.73 after the company increased its quarterly dividend and expanded its share-purchase program.

This article appeared in print on page 8 of the January 30th, 2014 edition of Hamodia.