General Stocks Rise on Wall Street After 3 Days of Losses 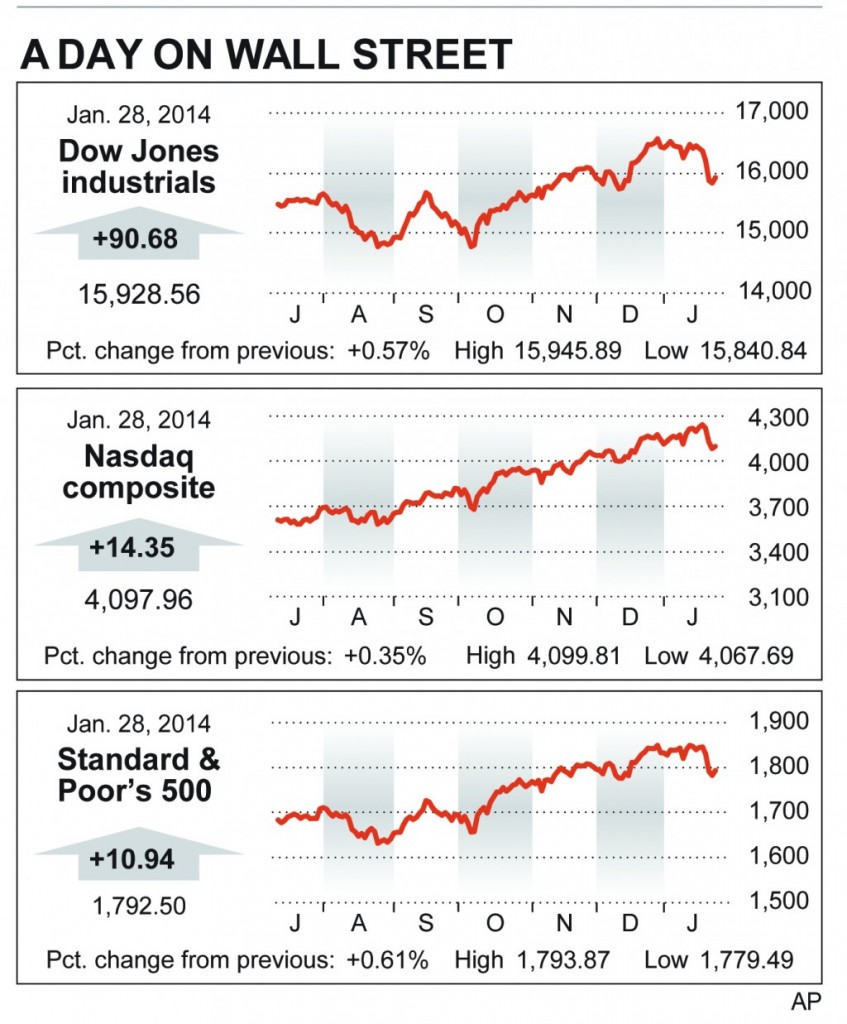 Investors’ jitters over emerging markets faded on Tuesday and U.S. stocks rose for the first time in four days.

Global stock markets stabilized after three turbulent days when investors grew worried about growth in China and other developing economies. The sell-off began last Thursday, when a survey for January showed that Chinese manufacturing was set to contract, dragging down stocks in Asia, Europe and the U.S. The slide continued on Friday as currencies in countries including Argentina and Turkey slumped. On Monday, Asian markets dropped, although the selling on Wall Street eased.

By Tuesday, though, global markets regained their calm. In the U.S., earnings gains from big companies, including Pfizer, Comcast and D.R. Horton helped lift stock indexes. One area of disappointment, though, was Apple, whose weak revenue forecast pushed its stock to the biggest one-day loss in a year.

The stock market has fallen 3 percent in January. In 2013 the market rose 5 percent in the first month, on its way to a 30 percent rise for the year, climbing to record levels.

Nine of the 10 sectors that make up the S&P 500 index rose. Health care and financial stocks were the two best-performing sectors. The technology sector was the only one to fall.

Apple slumped $44, or 8 percent, to $506.50 after the company’s first-quarter results released late Monday disappointed investors. First-quarter shipments of iPhones were below expectations, reinforcing perceptions that Apple is now mostly selling its mobile devices to repeat customers who are upgrading, instead of reeling in new customers. Apple also provided a cautious second-quarter revenue forecast.

A key reason that financial markets stabilized on Tuesday was the widespread expectation that Turkey’s central bank would raise interest rates later that day. The higher rates would shore up Turkey’s slumping currency and fight inflation.

After U.S. markets closed, Turkey’s central bank announced a sharp increase in its benchmark interest rate, to 12 percent from 7.75 percent. Relieved investors sent the Turkish currency, the lira, surging against the dollar. The lira’s plunge last week was at the center of an emerging-market slump that prompted the global sell-off in stocks.

The Argentine peso also stabilized Tuesday after a big drop on Friday when the government was forced to relax restrictions on the purchase of U.S. dollars. The peso dropped 0.3 percent to 8.02 per dollar on Tuesday.

Investors will once again focus on earnings Wednesday.

Fourth-quarter results at major U.S. companies are projected to rise by 6.3 percent from the same period a year earlier. Of companies that have reported results, about two-thirds have met or beaten expectations, according to S&P Capital IQ.

Investors will also be focusing on the Federal Reserve.

Most analysts expect that the Fed will announce that it will further reduce its bond purchases by $10 billion to $65 billion following a two-day meeting that began Tuesday. The central bank has been buying bonds to hold down long-term interest rates and encourage lending and hiring. The policy also helped power a rally last year, when the S&P 500 index had its biggest annual gain since 1997.

In government bond trading, the yield on the 10-year Treasury note held steady at 2.75 percent.