As Obama Prepares for Address, Many Previous Proposals Remain Unfinished 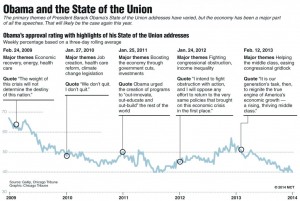 A year ago, when President Barack Obama delivered his State of Union speech before Congress and imagined providing preschool for all 4-year-olds, he followed his expansive vision with a bit of candor. “That’s something we should be able to do,” he said.

The president’s tone — more aspirational than expectant — was a nod to the reality of this annual Washington ritual. Little of what the president proposes in his most high-profile speech of the year is likely to get done, at least not any time soon.

As Obama polishes a fresh list of ideas to tick off Tuesday night, many of last year’s proposals remain unfinished — stymied by a politically divided Washington.

His gun control push has petered out. His immigration overhaul is stuck in the Republican-led House. Congress has not heeded his call to raise the minimum wage. And, in the year since his speech, neither the House nor the Senate, where his party is in control, has even held a hearing on a bill to expand preschool.

White House spokesman Jay Carney conceded that progress on last year’s proposals was “modest,” but searched for a favorable benchmark: “It was not modest compared to what we’d seen in previous years.”

Nearly all modern presidents have used the State of the Union address to showcase policy goals both real and still somewhat imagined. The proposals have been high-minded. But they have also been small-bore (President Bill Clinton famously endorsed school uniforms). They have been dreamy (President George H.W. Bush wanted money “to plant a billion trees a year”). They have been catchy (Obama’s “Buffett rule” would have ensured that billionaires paid a higher tax rate).

And they have included fixtures, such as health care reform, that have featured in nearly every address for decades. For Obama, the revolving cast has also included mortgage assistance, infrastructure spending, tax reform and college affordability. Despite the prime-time spotlight, many proposals seem to fade quickly.

“I think what you’re going to hear from the president on Tuesday night is a series of concrete, practical, specific proposals on how we restore opportunity through a wide set of means: job training, education, manufacturing, energy. And these will be some legislative proposals, but also a number of actions he can take on his own,” White House adviser Dan Pfeiffer said on “Fox News Sunday.”

The president wants to work with Congress, Pfeiffer wrote over the weekend in an email to supporters, but “will not wait for Congress.”

On Tuesday, he will announce new initiatives, which the White House has declined to discuss. “He’ll certainly aim high,” Carney said. “Presidents ought to aim high. I don’t think any president has ever gone before Congress and said, ‘I hope to do this, this, this and this with you that year’ and, at the end of the year, discovered that his list was too short, that everything got done.”

Still, the status of past proposals offers a glimpse of the prospects for success. Most initiatives Obama can push on his own are incremental, while most large-scale proposals move at glacial pace, or not at all.

Republicans on Capitol Hill are no more likely this year than last to endorse expensive programs — even in the name of job creation. They have shown little interest in minimum-wage legislation; bills that would raise it to more than $10 per hour have drawn no Republican co-sponsors. Immigration reform stands as the notable exception, not because Obama has prioritized it, but because some Republicans see it as a necessary step for the party to win over Latino voters.

This article appeared in print on page 3 of the January 28th, 2014 edition of Hamodia.