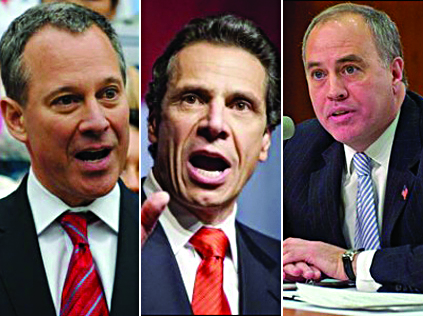 A government watchdog organization says its analysis of Gov. Andrew Cuomo’s $33.3 million in re-election campaign funds shows that 80 percent comes from donors who have each given a total of $10,000 or more.

The New York Public Interest Research Group says Thursday that 242 donors have given the incumbent Democrat $40,000 or more, and his largest single donor is Leonard Litwin, a Manhattan real estate developer who has contributed $800,000 in this election cycle.

Initially appointed to the office, DiNapoli was elected to a four-year term in 2010 over Harry Wilson, a Republican former hedge fund manager. No Republican candidate has yet announced plans to challenge the incumbent.

The comptroller is the sole trustee of New York’s $160 billion pension fund for public workers. The office also audits spending by the state and local governments.

New York Attorney General Eric Schneiderman reported raising more than $2 million in campaign donations over the past six months, with nearly $6 million on hand for a fall re-election campaign.

The Manhattan Democrat, a former state senator, reports $322,000 in campaign expenses since July. Schneiderman beat Republican Dan Donovan, Staten Island’s district attorney, to win a first term in 2010. No potential Republican candidate has so far announced plans to run against him in November.

The attorney general is the state’s top lawyer, with hundreds of attorneys on staff. They defend the state against lawsuits, file civil suits, monitor charities and nonprofits, police Medicaid fraud, investigate organized crime and sometimes investigate and prosecute wrongdoing in the state government.