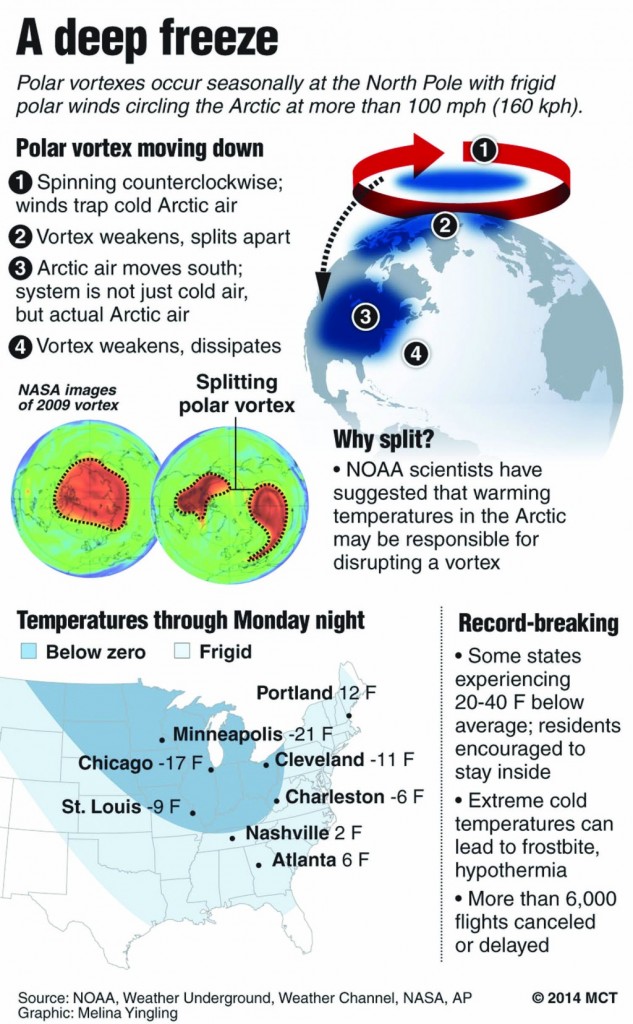 Fountains froze over, a 200-foot Ferris wheel in Atlanta shut down, and Southerners had to dig out winter coats, hats and gloves they almost never have to use.

The record-breaking polar air that has made the Midwest shiver over the past few days spread to the East and South on Tuesday, sending the mercury plunging into the single digits and teens from Boston and New York to Atlanta, Birmingham, Nashville and Little Rock – places where many people don’t know the first thing about extreme cold.

“I didn’t think the South got this cold,” said Marty Williams, a homeless man, originally from Chicago, who took shelter at a church opposite Georgia’s Statehouse in Atlanta. “That was the main reason for me to come down from up North, from the cold, to get away from all that stuff.”

The morning weather map for the eastern half of the U.S. looked like an algebra worksheet: lots of small, negative numbers. In fact, the Midwest and the East were colder than much of Antarctica.

The big chill started in the Midwest over the weekend, and by Tuesday, it covered about half of the country. In New York City, the high was expected to be 10; in Boston, around 18.

Across the South, records were shattered like icicles. Birmingham, Ala., dipped to a low of 7, breaking the record of 11 degrees set in 1970. Atlanta saw a record low of 6. Huntsville, Ala., dropped to 5, Nashville, Tenn., got down to 2, and Little Rock, Ark., fell to 9. It was just 1 degree at Washington Dulles International airport, eclipsing the 1988 mark of 8.

The deep freeze dragged on in the Midwest as well, with the thermometer reaching minus 12 overnight in the Chicago area and 14 below in suburban St. Louis. More than 500 Amtrak passengers were stranded overnight on three Chicago-bound trains that were stopped by blowing and drifting snow in Illinois. Food ran low, but the heat stayed on.

The worst should be over in the next day or two. Warmer weather – at least, near or above freezing – is in the forecast for much of the stricken part of the country.

On Tuesday, many schools and day care centers across the eastern half of the U.S. were closed so that youngsters wouldn’t be exposed to the dangerous cold. Officials opened shelters for the homeless and anyone else who needed a warm place.

Emergency workers in Atlanta drove the homeless to shelters or hospitals.

With the bitter cold slowing baggage handling and aircraft refueling, airlines canceled more than 2,000 flights in the U.S., bringing the four-day total to more than 11,000.

In New Orleans, which reported a low of 26 degrees, hardware stores ran out of pipe insulation. A pipe burst in an Atlanta suburb and a main road quickly froze over. In downtown Atlanta, a Ferris wheel near Centennial Olympic Park that opened over the summer to give riders a bird’s eye view of the city closed because it was too cold.

Monica Anderson and Tommy Howard jumped up and down and blew on their hands while they waited for a bus. Anderson said she couldn’t it recall it ever being so cold.

“I’m not used to it. It is best just to stay inside until it gets better,” said Anderson, who had to get out for a doctor’s appointment.

The Lower 48 states, when averaged out, reached a low of 13.8 degrees overnight Monday, according to calculations by Ryan Maue of Weather Bell Analytics. An estimated 190 million people in the U.S. were subjected to the icy blast, caused by a kink in the vortex,” the strong winds that surround the North Pole.

Farmers worried about their crops.

Diane Cordeau of Kai-Kai Farm in Indiantown, Fla., about 90 miles north of Miami, had to pick her squash and tomatoes Monday to beat the freeze but said her leafy vegetables, such as kale, will be sweeter and tastier because of the cold.

“I’m the queen of lettuce around here, so the colder the better,” said Cordeau, whose farm serves high-end restaurants that request specific produce or organic vegetables.

PJM Interconnection, which operates the power grid that serves more than 61 million people in the Mid-Atlantic, Midwest and South, asked users to conserve electricity because of the cold, especially in the morning and late afternoon.

Across the South, the Tennessee Valley Authority said power demand in the morning reached the second-highest winter peak in the history of the Depression-era utility. Temperatures averaged 4 degrees across the utility’s seven-state region.

In South Carolina, a large utility used 15-minute rolling blackouts to handle demand, but there were no reports of widespread outages in the South.

Natural gas demand in the U.S. set a record Tuesday, eclipsing the mark set a day earlier, according to Jack Weixel, director of energy analysis at Bentek Energy.

In Chicago, it was too cold even for the polar bear at the Lincoln Park Zoo. While polar bears can handle below-zero cold in the wild, Anana was kept inside Monday because she doesn’t have the thick layer of fat that bears typically get from feeding on seals and whale carcasses.