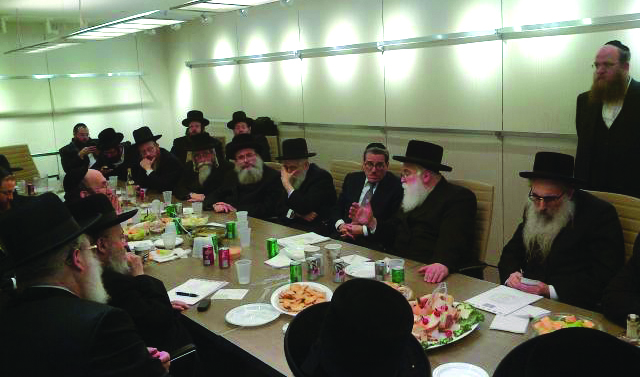 A delegation of leading askanim met in Manhattan Tuesday to work out details for the mass rally that will be the highlight of the unprecedented trip to the U.S. by members of the Moetzes Gedolei HaTorah of Agudas Yisrael in Eretz Yisrael — to protest the persecution of the chareidi community and lomdei Torah in Eretz Yisrael.

The Gedolim have chosen Tuesday, Parashas Beshalach — January 7, as the date for the event, and the organizers are now working on the logistical details.

Representatives of numerous kehillos in the New York area, as well as personal representatives of the Gedolim, attended the meeting, which took place at the offices of the noted askan, Mr. Shlomo Werdiger, Chairman of the Board of Trustees of Agudath Israel in America.

Though indoor venues are considerably smaller than the outdoor options, and even the largest indoor stadium will be unable to accommodate on its own the masses that are expected to participate, scheduling such an event outdoors during the winter has been deemed all but unfeasible.

The organizers are now considering renting the largest available venue, and arranging satellite locations for the overflow crowd.

The news of the historic Moetzes trip has generated enormous interest and anticipation in the Torah communities in the United States, Eretz Yisrael and around the world. The very fact that the unprecedented trip is taking place underscores the gravity of the crisis in Eretz Yisrael.

As reported in the Tuesday edition, after days of speculation, the court of the Belzer Rebbe, shlita, has confirmed that the Rebbe will be joining the trip. The news that the Rebbe, who hasn’t visited the United States in 15 years, will be undertaking the journey has electrified his followers in America.

The Sadigura Rebbe arrived in the United States on Monday on a previously planned trip, and the Boyaner Rebbe is also scheduled to arrive in the coming days in America for a pre-planned trip. Both will be joining the mass rally.

Emissaries of the Moetzes Gedolei HaTorah of Agudas Yisrael in Eretz Yisrael are engaging in discussions with representatives of the Satmar Rebbe, Harav Aharon Teitelbaum, shlita, about the possibility of the Rebbe and his kehillah participating in the mass rally. Discussions with other kehillos are also continuing.

Why are the Gedolim coming?

Torah Jewry in Eretz Yisrael is currently experiencing a crisis of epic proportions, one that calls for extraordinary, dramatic steps. This unprecedented and historic trip is intended to awaken American Jewry from its apathy and to help explain what is really transpiring in Eretz Yisrael.

What are they trying to accomplish by doing it here in America? Why not stage a mass rally in Eretz Yisrael?

The fact that so many leading Gedolim — including some who haven’t traveled to America in many years — shocked their closest followers by announcing that they will put everything else aside and undertake this strenuous journey, in itself sends a very powerful message about the gravity of the situation.

In addition, chareidi Jews in Eretz Yisrael are painfully aware about the  situation they are facing. On the other hand, there are many misconceptions and misunderstandings in the minds of Jews of the Diaspora.

What can American Jews possibly do to help?

It is crucial that chareidi Jews throughout the world stand united and informed about the severity of the danger hovering over the Torah world in Eretz Yisrael. It is vital that there is a broad recognition that the policies of the present Israeli government are increasingly limiting the ability of a Jew to live a Torah life in Eretz Yisrael. Yesh Atid and its partners see chareidi Jews as their foremost enemies, and are operating on numerous fronts to try to coerce chareidi Jews to abandon their traditions and mesorah. A united front by American Jewry would also increase the pressure on the present Israeli government.

When will this event take place?

It is scheduled to take place on Tuesday, Parashas Beshalach, January 7, iy”H.

Where will it take place?

The venue has yet to be finalized.