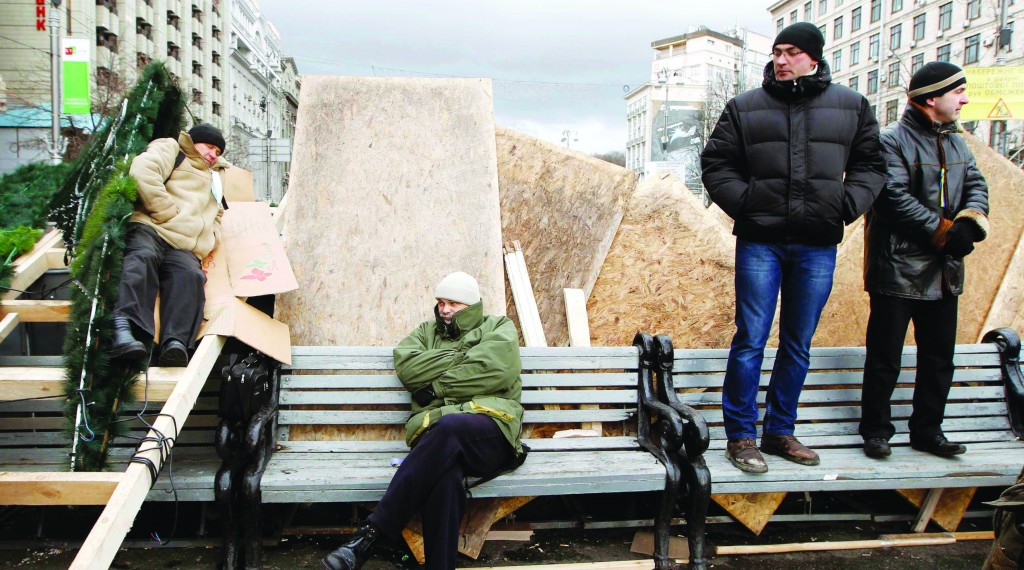 The opposition, meanwhile, scrambled to secure enough votes in parliament to oust the Cabinet and try to force an early presidential election, in the biggest unrest in the country since the 2004 Orange Revolution.

President Viktor Yanukovych struggled to reaffirm his grip on power as thousands of demonstrators besieged government buildings in Kiev, his party suffered defections and three cities in the west of the country openly defied the central government.

The protests were sparked by Yanukovych’s decision to ditch the political association and free trade pact with the EU, followed by the violent dispersal of a small peaceful rally in Kiev over the weekend.

On Monday, Yanukovych called European Commission President Jose Manuel Barroso and asked to renew negotiations on signing the association agreement. He also said in an interview with Ukraine’s main media channels that he remains committed to European integration, but would like to negotiate better terms for the fragile Ukrainian economy. 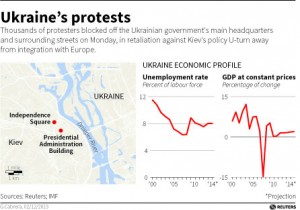 Yanukovych urged the opposition for calm and dialogue with the government. But his call fell flat with opposition leaders who were hoping to summon enough parliamentary votes Tuesday to oust the Cabinet led by Yanukovych’s loyal supporter, Prime Minister Mykola Azarov, and force an early presidential vote.

“We need to change the system. There must be a complete reloading of the leadership,” opposition leader Vitali Klitschko told reporters.

It was unclear whether the opposition could muster the 226 votes it needs in the 450-seat parliament to oust Azarov and his Cabinet.

The opposition controls about 170 seats, but independents hold 35 more and the governing Party of Regions was shedding support. At least three of its lawmakers quit in protest and one of them, Inna Bohoslovska, previously a vocal government supporter, called on other legislators to leave the party. A top Agriculture Ministry official also resigned Monday.

Opinion surveys conducted before the protests showed about 45 percent of Ukrainians supporting closer integration with the EU, with a third or less favoring closer ties with Russia. But the protests, and the police violence, appear to have unleashed anger against the government and tipped the balance more strongly in favor of integration with the EU.

Azarov criticized the opposition for blockading the government buildings and said the actions have the makings of a coup.

Putin, speaking Monday on a visit to Armenia, called the demonstrations an attempt by the opposition to destabilize the government.

“The events in Ukraine look more like pogroms than a revolution,” he said.

Officials in the western cities of Lviv, Ivano-Frankivsk and Ternopil announced they were going on strike and called on their residents to turn out for protests. Lviv’s mayor warned that police in his city would take off their uniforms and defend the city if the central government sent reinforcements. Scores of protesters from Lviv and elsewhere in western Ukraine have headed to Kiev by train and car to take part in the rallies.

“Yanukovych is now fighting for his political survival, and time is no longer on his side,” said Tim Ash, an emerging markets analyst with Standard Bank in London.

The opposition also was getting support from Ukraine’s main media channels, which are owned by the country’s wealthiest businessmen. Instead of largely toeing the government line, the channels have begun to give a greater platform to the protesters.